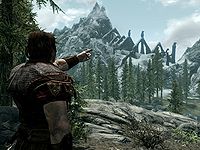 "That place always used to give me nightmares." 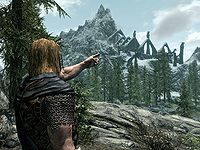 "See that ruin up there? Bleak Falls Barrow."

As you head out from the dungeon with either Hadvar or Ralof, the dragon that attacked Helgen will travel over your head. Hadvar or Ralof will advise you to get down, but you're free to stand up and watch the dragon fly away. Hadvar or Ralof will comment on the dragon and continue on the path. You can now explore the area and advance to Riverwood at your own pace or follow whoever is accompanying you down the path. Following Hadvar or Ralof does not grant any special bonuses, but you do get to listen to your companion comment on the world around you, and they will point out the Guardian Stones and let you pick one that suits you. He will comment differently depending which stone you choose.

A Friend of a Friend 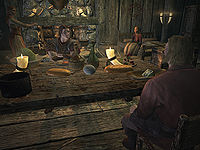 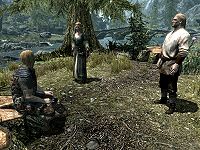 Once you arrive at the village of Riverwood, you will be directed to speak to Alvor, the local smith (if you chose to follow Hadvar during the flight from Helgen) or Gerdur, the woodmill worker (if you chose to follow Ralof). Explain your situation and he or she will recommend you seek out the jarl of the region, Jarl Balgruuf the Greater at his palace in Whiterun. They will also offer you what assistance they can (in the form of some low level food, potions, and jewelry) to get you started. Only Gerdur will give a key to her house.

If you arrive in Riverwood very late, then the person you're directed to meet won't immediately offer you assistance. If you ask whether you can take any supplies, you will be allowed to take some things, and be directed to see the jarl.

Head out over the bridge out of town and follow the path north to Whiterun. Upon arrival at the main gate, a guard will tell you the city is closed to visitors. Any one of the dialogue options you are presented with will have him let you in the city, except for trying to intimidate the guard. Once inside, follow the path up to Dragonsreach and enter. When you approach Jarl Balgruuf, his housecarl, Irileth, will ask you why you are interrupting the meeting; any dialogue option will gain you an audience. Speak with Jarl Balgruuf to complete the quest and begin the next. He will reward you with a piece of leveled armor. Whether you receive light or heavy is governed by your aptitude in those skills. If they are equal, Balgruuf will give you heavy armor.