Bliss is vibrant and full of bright colors. 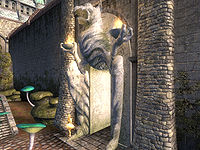 The Gate leading to Crucible

Bliss is the bright and cheery half of New Sheoth, in Mania, most of whose residents are utterly insane. Bliss is guarded by the Golden Saints and ruled by the Duke of Mania, Thadon.

The district comprises a central plaza, a main thoroughfare, a side street and the public gardens. The plaza consists of various shops and houses and contains a fountain sculpture depicting Sheogorath surrounded by mermaids. The main road in Bliss leads from the plaza to the gate to Crucible, while a side street is home to several residents of Bliss. In the northern part of the district are the public gardens, boasting flora native to Mania. Various walkways crisscross above Bliss, with one connecting to New Sheoth Palace.

Along with Crucible, Bliss does not have its own jail. Criminals who are arrested in the district are instead sent to Aichan, located north of The Fringe. 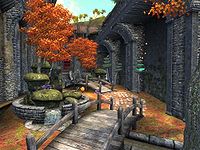