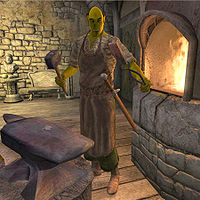 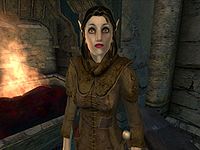 "You think I'm ugly, don't you? And that she's a prettier smith?"

Dumag gro-Bonk is an Orc smith living in Bliss, New Sheoth. He is the proprietor of The Missing Pauldron. He sells a wide variety of weapons and armor, and offers repair and recharging services. Dumag is also one of two smiths in the Shivering Isles that can forge powerful magic and non-magic weapons and armor; his specialty is forging Light Armor from Amber and Amber Matrices.

He wears a set of lower class clothing: a blacksmith's apron, green felt linens and a pair of scruffy shoes. He is armed with an iron shortsword and carries his key and a small amount of gold.

Like most other merchants, Dumag offers his various services every day between 8am and 8pm. After closing up the smithy, he heads into his private quarters and enjoys a two-hour dinner before he goes to bed at 10pm. After he wakes up at 6am he treats himself to a two-hour breakfast before he unlocks the doors to The Missing Pauldron once again.

His greeting isn't exactly a typical Orcish one: "Hello! I'm Dumag gro-Bonk. Best and prettiest smith in town. I know the secret art of forging Amber. Here. Take this list. It explains what I need." Asking about his mysterious skill will net you: "Amber is a resin found in root system tunnels and on Gnarls. When treated properly, it is especially suited to lightweight weapons and armor. I, alone, know the ancient art of forging Amber. I can even craft you magical items." If you inquire further he will say: "Before my master passed on, she hid countless matrices in the world. There to soak up the magical essence of our world. As my master has done, so will I, before I pass on. Find me one of these matrices and enough Amber, and I will craft you a magical item." On subsequent meetings he will offer greetings like "What can I help you with, sweetheart?" and farewells like "Bye, dear.", regardless of your gender. He will treat female characters as equals and act flirtatious towards male characters. One thing is for sure; he is not friendly towards Crucible smith Cutter and will never waste an opportunity to bad-mouth her: "You see, I am the Master Smith of New Sheoth, don't bother with that other smith in town.", along with two additional farewells: "A happy customer is a returning customer." and "Remember, come to me for all your crafting needs."

During the quest related to forging weapons, The Antipodean Hammer, should you at any time choose to let Cutter forge a weapon for you, the feminine Orc smith will get all jealous and say: "You think I'm ugly, don't you? And that she's a prettier smith? Is that it?", "I am the Master Smith of New Sheoth. Why bother with that other smith?" and "What can you possibly see in her? She spends more time cutting herself than swinging a hammer." Additionally, Dumag also has a number of unique lines when bartering, all related to his persona: "Armor and weapons. Maybe not pretty, but they get the job done.", "I'm sure I have something here you can use." and "Always a good idea to protect yourself. I can help with that." If you get greedy and try and sell him equipment at a high price, he will reject with the words: "Are you trying to take advantage of me? I'm not making that deal." and "I'm cursed with ugliness, not stupidity."

Every time you hand him the acquired amount of Amber, the Orc will forge a weapon or a piece of armor for you and make several remarks, depending on your gender. The remarks will change if you hand him a Matrix and ask him to make a magical version of the equipment. 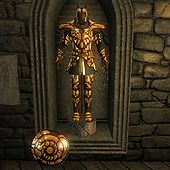 At different stages in the Main Quest, Dumag will share different rumors with other NPCs: