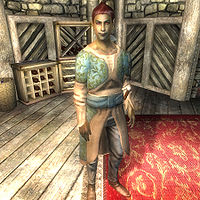 Rendil Drarara is a Dunmer commoner and "chef extraordinaire" who lives in Bliss, New Sheoth. He is manically obsessed with cooking and spends most of his time creating various gastronomical treats using a wide array of exotic ingredients.

He sleeps in the upstairs area of his house every night between 10pm and 6am. He always starts the day with a two-hour breakfast seated at the well-provided dinner table in his bedroom. At 8am, he heads over to Tilse Areleth in Common Treasures for a bit of shopping. He returns to his house at 10am and starts cooking in the kitchen area of the ground floor. He keeps going until 2pm, when he heads down to the Sacellum Arden-Sul for two hours of praying. At 4pm, he heads back home for another four hours of cooking until he finally heads upstairs and eats a two-hour dinner at 8pm. When the Sacellum is closed between Ritual of Accession and Retaking The Fringe, Rendil simply keeps cooking at 2pm.

Like a true chef, Rendil always carries a complete set of kitchen utensils around, a pewter bowl with a fork and knife, as well as a respawning carrot and whatever ingredients he has picked up. He wields a fine iron dagger and wears a brown tunic with grey trousers and orange loafers. He also carries his house key and a small amount of gold.

When you meet him for the first time, he will introduce himself and present you with some of his specialties: "Rendil Drarara, chef extraordinaire at your service. You haven't truly eaten a decent meal until you've had my Strawberry Harrada, Greenmote Lime Surprise, and Spiderling Under Glass!" On second encounters, he may say: "Make this brief, I have a pot of Grummite Gumbo simmering on my fire at home." When you exit the conversation, he will say: "Farewell. So much to bake, so little time!" When you or other citizens get near him, the food-obsessed chef will say: "Mmmmm. Is that fresh bread I smell?"

At different stages in the Main Quest, Rendil will share different rumors with other NPCs:

If Rendil is killed and his tombstone in New Sheoth Graveyard is activated, it will read: "He's cooked his last meal".