This quest only becomes available once you have downloaded the Knights of the Nine official plug-in.

Make your way to Garlas Malatar and meet with the other Knights. You may choose to have them wait or launch the attack. Essentially your choice makes no difference, for they will all head into the ruin when you enter. Once inside jump down to the open area. Activate the switch on the left pedestal to open the three gates (ideally it is best to kill off the Aurorans in this area before activating the switch, as opening the gates will cause more Aurorans to come in or your Knights to scatter wildly, running into the new unlocked areas in search of more themselves). Once ready, you can either go through the gate on the bottom level or head up the staircase. The bottom gate is the shortest direct route to the next zone, if you head up the staircase take either passage and then head left up another staircase and follow to the map marker. 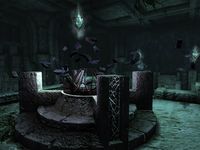 The Orb is shattered and time is frozen

Enter the door to the zone Ceysel. Make your way through to two locked gates. Activate the switch on the wall between the gates to open them. Go through one of the gates and you'll emerge in a large room with a glowing black sphere called the Dark Orb in the center up on a platform and many Aurorans surrounding the room. Until you destroy the Orb, the Aurorans will keep resurrecting (they show a white healing spell type flourish as they stand back up at full health.) Since your Knights are not similarly immortal (with the exception of Sir Thedret), you will want to destroy the Orb as quickly as possible if you want the original named Knights to survive (and if you don't want to be overwhelmed by them once they've dealt with your followers). Follow the path to the right, up the stairs, and you will find the Dark Orb. Activate the Dark Orb to destroy it. It will explode and freeze time in that room, all Aurorans and your Knights will fade from view. Slightly back west of the Orb is a switch on the bottom of the right arch, activate it to open up a staircase back down to the lower part of the room and the entrance to Umaril.

Proceed north to the door and make your way through the passages to a large room with a shallow liquid pool in the center. As you enter, the room will light up, the passage back will be blocked with energy, and a staircase will rise. Umaril's physical form, an oversized Auroran, appears. Your holy destiny awaits you.

After the battle, be sure to grab Umaril's sword before casting Blessing of Talos (there will be a chance to grab the sword a second time, doubling your gain). You can take as much time as you like exploring and collecting loot before finally casting the spell although you are limited to that room alone. Once you cast Blessing of Talos, turn to the center of the room to watch events unfold. You'll be transported to the sky above the Imperial City with Umaril attacking you. Finish him and his legend for all time. After this battle, when you are falling to Nirn, Umaril's body and his sword will be falling with you. You can target it and take it for a second sword, however, be careful not to land on it when attempting to do so or you will take falling damage, which will probably kill you.

Priory of the Nine 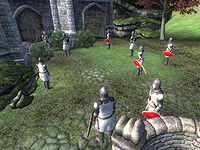 Sir Thedret delivers the praise of your knights

After falling for some time, you will be transported to the basement of the Priory of the Nine. Sir Amiel will speak to you and explains what now will happen to them, then watch them all disappear. Sir Berich will remain if you have not already spoken to his ghost. Speak to him too and he will depart.

As soon as you are done talking to the ghosts of the former Knights of the Nine and leave the basement, Sir Thedret will run down the stairs to find out where the voices he heard were coming from. Upon seeing you, he is overjoyed and engages in conversation. According to him, when you went to fight Umaril in the spiritual plane, the remaining knights defeated the last of the Aurorans, and set out to find where you went. They then found your body beside Umaril's, and taking you for dead buried it in the Priory undercroft so the enemies of the Nine would not know you were killed in battle. Being the one to bury you, he can barely restrain his joy at finding you alive and runs upstairs to tell the knights what has happened.

Follow him outside, and you will find him giving a speech to your fellow veterans of the battle (along with new recruits, if you lost any knights during the raid). He will bless the Nine on the Order's victory, and the Knights of the Nine all give you one last hurrah before returning to their new life at the newly restored Priory of the Nine.

This bug is fixed by the Unofficial Oblivion DLC Patches. The reward is changed to +5 Agility.