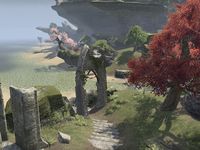 The eastern coast of Auridon 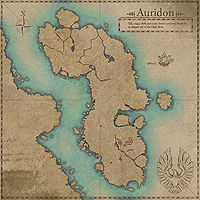 A map of Auridon

Of all the lands in the Summerset Isles,
Auridon, she outshines them all.
With her marble halls and towering spires,
Her beauty surpass'd them all. — Ode to Auridon

Auridon is the second largest island in the Summerset Isles, located off the far eastern coast of Summerset,[1] and north of Artaeum,[2] between the main island and the continent of Tamriel. The main cities on the island are Firsthold at the northern point and Skywatch to the east.

The king of Firsthold, Rilis XII, met with the Psijic Iachesis before approving the establishment of the Mages Guild.[3]

For millennia, the sloads of Thras, notorious for the necromantic mastery, terrorized the Altmer, conjuring sea monsters along the coasts and laying siege to Skywatch.[4] The horrors they have visited upon the land are still remembered today: the Sack of Skywatch in 1E 1301 and the War of the Uvichil from 1E 2911 to 1E 2917 are surely among the most terrible events in Tamriel's history.[5]

Internal conflicts between Skywatch and Firsthold often sparked into full war during the First and Second Eras.[5]

The Trebbite Monks are known for the good they do for the peasants, and they value tradition above every other virtue. Their credo has ever been for pure Altmer bloodlines on Summerset, and among the royal families most of all. During the Third Era the Trebbite Monks worked with Lady Gialene, daughter of the King of Skywatch, to start a revolution against the Dunmer Queen of Firsthold, Morgiah. Despite the growing resentment in the countryside from peasants who called Morgiah the "Black Queen", they stopped short of insurrection, and the revolutionary army was primarily composed of the Monks themselves and a horde of mercenaries. The revolt ended in a panicked, unorganized retreat, and after Lady Gialene was tortured and confessed her treachery, she was sent back with escort to her father's court of Skywatch.[6]

Calluis Lar
A small island off the coast where pirates have been known to attack royal barges.[6]
Firsthold
A city of gleaming spires in the north of Auridon.[6]
Skywatch
A city in east-central Auridon often attacked by the Sload.[5]
Tanzelwil
An ancient mausoleum in the south, which holds the ashes of countless Kinlords and is an important stop on the traditional Altmer pilgrimage.[7]
Trebbite Monastery
A monastery in the countryside. The Trebbite Monks value tradition and purity of Altmer bloodlines.[6]
Vulkhel Guard
A bustling port at the southernmost point of Auridon.