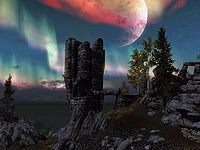 Nilheim is a tower east-northeast of Ivarstead containing bandits disguised as guards.

It is located east-northeast of Ivarstead and northwest of Sarethi Farm. 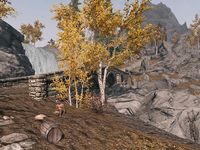 If you do not first speak to Telrav, the occupants are disguised as guards and are non-hostile. You can loot everything in the tower without any of them caring.

If you do speak to Telrav and initiate his quest to return him to his camp, all of these "friendly" guards are revealed to be bandits. Killing Telrav unprovoked without initiating the quest results in the guards being hostile when you approach. After speaking to Telrav, he will lead you across the bridge and up several flights of stairs until you reach the main camp. At this point he will reveal his true colors and attack along with the bandits in the main camp. Once they are dealt with there may still be one of the imitation guards on the second floor of the tower. He will be hostile when you approach. 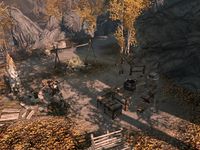 The main camp consists of a campfire with three long wooden tables and benches arranged around it. One of these has a steel battleaxe, an iron dagger, a small coin purse, three loose septims, an apothecary's satchel and a sack of food on top, the next has an unlocked chest beside it and the third has two seared slaughterfish and two samples of slaughterfish scales on top and three food barrels beside it with a leather strip on one of these. To the north of the fire is a wood chopping block.

More stairs rise to the southwest; at the top is a ruined wall and to the right of this is a stone bridge crossing to the tower. Inside, there is a dresser opposite the door with a steel sword on top. Stairs lead from here to a wooden ramp that takes you up to the next floor, where you may find a hostile imitation guard. There is a table next to the entrance with a steel war axe, a large coin purse, an empty random soul gem and a leveled potion of lasting potency on top and several food sacks underneath. Further into the room are three unowned bed rolls around an extinguished fire and several barrels and sacks of food. There are wooden stairs up with a wardrobe underneath.

The top of the tower has an unlocked chest as well as an awe-inspiring view of southeast Skyrim. On a clear day, one can see the entire Jerall Mountains that surrounds southeastern Skyrim, and to the north one can see further than Windhelm. To the west the view is blocked by the Throat of the World, and Northwind Summit to the east.

There are two unnamed bodies, an Imperial and a Breton, thrown among the rocks at the base of the tower. Further down the slope on the rock cliff is the body of a bandit.