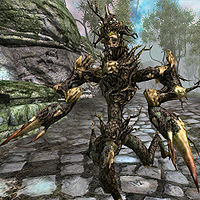 The ingredient Gnarl Bark is collected from Gnarl corpses.

37 guaranteed samples can be found. The places with the highest numbers of samples are (magenta crosses on map):

Gnarl Bark is obtained from every type of Gnarl, including both Mania and Dementia varieties of Germinal Gnarls, Gnarl Saplings, Gnarl Rootbenders, Verdant Gnarls, and Gnarl Elders. Gnarls can generally be encountered at any level. However, there are a few outside leveled lists where Gnarls will not appear until level 4.

The only guaranteed locations with respawning Gnarls are several exterior locations in Dementia (red squares on map), mostly in the region southwest of New Sheoth, with a few more in the Madgod's Boot region. Non-respawning gnarls appear at all levels in the following locations (magenta circles):

The non-respawning Gnarl in Highcross (magenta square on map) is Mirili's Gnarl, which is only present after the relevant task has been completed for the quest Taxonomy of Obsession.

Gnarls are likely but not guaranteed to appear at all levels in several caves (orange circles): 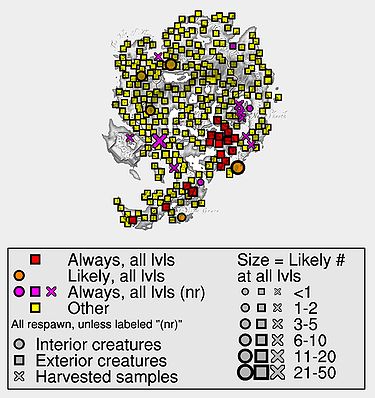