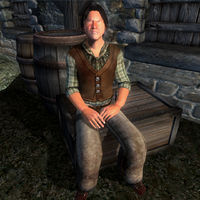 Rowley Eardwulf is a Breton merchant at the Wawnet Inn. He only appears after you buy the Vile Lair official plug-in. He has 2000 available gold and sells weapons, enchanted armor, and upgrades for Deepscorn Hollow. He also provides training in Sneak up to level 50.

According to Greywyn's Journal, Rowley was a former member of the Dark Brotherhood who aided Greywyn in his dark plan to destroy the Black Hand with an army of Vampires. He escaped the Brotherhood's wrath when the sanctuary was "purified", and is the only surviving member of the Crimson Scars.

He wears a plaid shirt, light brown linens and a pair of quilted shoes. He is armed with a leveled dagger and always carries some mutton.