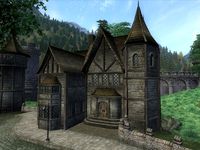 Rimalus Bruiant's House is located in the north of Chorrol, between the Chorrol Fighters Guild and Vilena Donton's House.

A bookshelf across from the front door, beside the fireplace, holds a few books, including The Argonian Account, Book 4 and The Madness of Pelagius. To the north, the northern portion of a dining area holds two sets of drawers with clutter in them. On the table sit three tomatoes, two carrots, and a loaf of bread. The west end of the dining area holds a third set of drawers with clutter and another table that holds a cheese wedge and a loaf of bread. In the east corner of this level, a kennel sits at the foot of the stairs, while at the top a table is set with a cheese wedge and five strawberries next to a cupboard that holds drinks.

Another kennel sits on the balcony in the east corner of the second level. In the sitting area in the north corner, a desk holds clutter and possibly common books, while a chest of drawers holds more clutter on the top portion, clothing in the bottom. The bedroom in the west corner holds a cupboard that contains clothing, a set of drawers that hold clutter with a restore health potion on top of it, and a final chest that holds jewelry and may also contain more enchanted jewelry or potions. This chest is the only container on these two levels that does not respawn.

The door in the southern corner of the first floor leads to a set of stairs down to the basement. At the foot of the stairs sits a clutter cupboard next to two sacks with the same contents and a third that holds food, as well as a chest that can contain armor and/or weapons; the chest and sacks do not respawn. The shelves here hold two ears of corn, two loaves of bread, and a head of lettuce. A pumpkin lies on the floor in front of the shelves. The table on the northeast wall is set with three more ears of corn, another head of lettuce, and a second pumpkin. A barrel holds food in the north corner. In the west corner a cupboard holds drinks and a non-respawning chest holding gold and possibly jewelry lies under a table with a loaf of bread and a cheese wedge on top. The south corner holds two more food barrels and a cupboard with the same contents. Four garlic clusters hang from the post in the middle of the room. In the second room six more kennels are stored, while three pieces of boar meat and three pieces of rat meat lie in dishes on the floor. A clutter barrel that can also hold a repair hammer sits on the southwest wall along with a food barrel, and the same containers sit on the northwest wall.