Boar Meat can be collected from dead Boars.

The ingredient Boar Meat is primarily found as food, and can also be collected from dead Boars.

52 guaranteed samples can be found (these locations will respawn, since boar meat is food), in the locations marked with red crosses on the map. The places with the highest numbers of samples are:

Boars are most commonly encountered as randomly generated Animals, but they are only found outdoors. They are easiest to find from levels 7 to 15, when there is a 10-33% chance of finding them in Forest, Plains, Swamp, and Rainforest wilderness regions (squares on map). On roads (blue squares) they can be found as early as level 5. Past level 16, they can be found in Plains and Rainforest regions, but not Forests or Swamps.

The other possible place to find Boars is in the Arena, where they can be a possible opponent in Grand Champion matches at levels 1 to 5. The Arena is the only place where boars can be encountered below level 5. (Note that Porkchop, however, does not provide any boar meat). 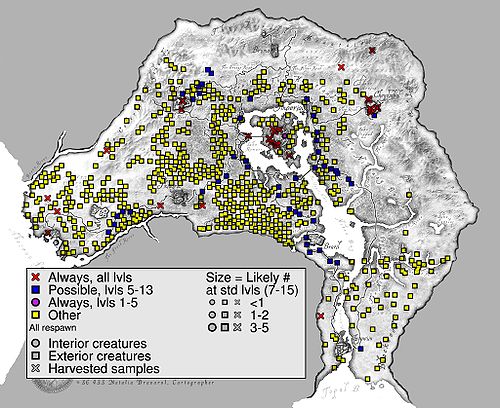