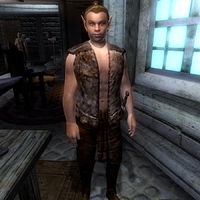 Enilroth is a Bosmer smith, and apprentice to Varel Morvayn at his shop Morvayn's Peacemakers in Anvil. During the Dark Brotherhood quest Following a Lead, Enilroth acts as the unknowing courier of the Dead Drop Orders written by the robed man residing in the basement underneath the Lighthouse.

He has an early start, waking up at 6am and immediately heading to The Flowing Bowl for a two-hour breakfast. He then works an eight hour shift as Morvayn's apprentice, before meeting up with his secret lover, Heinrich Oaken-Hull's wife Hasathil, behind the Horse Whisperer Stables, conversing with her until 8pm, at which time he will head back to The Flowing Bowl for a two-hour dinner. He then returns back to the shop, wandering around for two hours before he settles down for the night at 12am.

Enilroth wears a huntsman vest with matching pants and moccasins. He wields a steel bow and a steel dagger. He carries the key to the store he works in and a small sum of gold. During the related quest, while acting as a courier for Mathieu Bellamont, the Dead Drop Orders 8 and your 500 gold reward will be added to his inventory; after being caught, Enilroth will keep the gold reward for himself, leaving only the Orders in the barrel.

When you meet him for the very first time, he will politely introduce himself: "Enilroth, Morvayn's apprentice." When asked about the city of Anvil, he will tell you: "Varel Morvay's [sic] been a good master. I like the town and the people. No reason why I wouldn't want to be here for many years... just like the master." His master concurs and will tell you: "Been here thirty years, and I expect I'll last another ten or so. When I'm gone, gods willing, my apprentice, Enilroth, will tend the smithy."

During the related Dark Brotherhood quest, you are told by a furious Lucien Lachance to spy on the next supposed "dead drop", a barrel behind the mermaid statue in western Anvil. When you arrive, Enilroth will break off his routine and approach the barrel; when you confront him he will be quite scared: "I'm... I'm sorry! I didn't mean to do anything wrong! It was the robed man! He... he paid me to put those things in the barrel! I don't know his name, and his face was in shadow. He called to me yesterday as I walked by the lighthouse. I think he lives there! Or he did, anyway. He told me he was leaving Anvil. I'm sorry, but that's all I know!" From here, you can react in three different ways, all three leading to the same answers with different amounts of fear;

He will then continue: "I don't know what goes on down there, but there's a horrible smell coming from underneath that door. It's like... something died inside! Listen, that's all I know, really! Maybe Ulfgar Fog-Eye can tell you more. He's the lighthouse keeper, and probably rented out the cellar. Talk... talk to Ulfgar. He's sure to have the key to the cellar. You know, if... if you want to get down there! Now please, just let me go!" On subsequent meetings, until the quest is completed, a seemingly guilt-ridden Enilroth will say: "I hope you're not too angry with me. I... I never meant to do anything wrong, honest!"