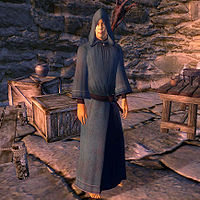 Ancotar, an Altmer warlock, is a Wizard of the Mages Guild living in Fort Caractacus, north of the Imperial City. His recent experiments have had the unfortunate result of rendering all living people and creatures within a wide radius of his fort, including himself, completely invisible. This has caused a problem for the nearby small settlement of Aleswell.

Ancotar does not appear in the game before the related quest stage 20, when he will confront you as soon as you approach the exterior of Fort Caractacus. Upon completion of the quest, he will start to wander around the fort's exterior, never even eating or sleeping, despite the presence of a bedroll. His preferred areas will be the small lab he has set up for himself on the exterior's second level and the grassy area north of the fort. As he becomes unessential after the quest, the wildlife that spawn outside the fort may often result in his untimely death.

He wears the standard mage's robe and hood. He also carries his ring, a leveled magical scroll, and may possess two magical potions (50% chance each). In combat, he relies on set of leveled Destruction, Illusion, Restoration, and Conjuration spells, his Invisibility spell (which is actually an 80% Chameleon effect), and, from level 5 onward, a leveled staff.

As you are out to help the population of Aleswell, you have no choice but engage in conversation: "Oblivion take you! What is it you want from me?" When you confront him about his experiments, he will proudly explain: "Yes, I have been working on a new invisibility spell. As you can see, it works quite well. Why?" When you tell him about the unfortunate situation in Aleswell, he'll fake surprise and guiltily tell you: "Oh... Really? Everyone in town? That must have been what all the shouting was about a few weeks ago. I'm afraid I was engrossed in an experiment that required my full attention. You see, in order to increase the efficacy of the spell, the radius was likely to approach the... never mind. I don't mean to bore you." If you tell him that you really are interested, he will be unstoppable: "Ah, a fellow mage! Please excuse my rudeness earlier. I find most people extremely tedious. Completely ignorant of the arcane. I came out here to get some privacy for my research. Instead, I was constantly bothered by the local peasantry! 'The explosions are scaring the sheep' or 'A plague of rats ate all our crops.' Every day another complaint! No understanding of the pitfalls of experimental magic! Finally, I decided that permanent invisibility was the only way to get some peace and quiet. I know! You're about to quote Vanto's Third Law... don't worry! I have not actually found a way to violate the Conservation of Perception! The invisibility is not actually permanent. You can tell the villagers not to worry, it will wear off eventually. Well, in a year or two. Maybe a bit more. There's no way to be absolutely sure. That's the exciting thing about basic research!"

When you ask him to speed things up a bit, he will reply: "Really? I find being invisible quite refreshing. But, if it will get everyone to leave me alone, fine. I did work out a counter-spell last week... if I can just put my hand to it... ah! Here. Stand in the center of town, to make sure you get everyone. Oh, and make sure... never mind. Should be fine." When asked about his invisibility spell at this point he will say: "I am sorry about that. Just use the Reverse Invisibility scroll I gave you." When asked about the Reverse spell, he will say: "Yes, just read the scroll in the middle of town. It should work... although... Just in case, it might be best if you wore this ring while you were casting the spell. I make them myself. Very useful for this kind of research. Not that I think anything will go wrong. Serious side effects are highly unlikely." If you cast the Reverse Invisibility spell near Ancotar he will get furious: "Look what you've done! Spoiled my invisibility! This is my reward for trying to help the wretched villagers?" When you ask him for another scroll, he will hand it to you with annoyance: "What do you mean you need another one? I believe the instructions were very clear: stand in the middle of Aleswell and read the scroll. Hard to believe that anyone could find that too complicated. Lucky for you, I made a backup scroll. Here. But I don't want to see you again." If you waste another scroll, Ancotar will refuse to help you: "You wasted it again, didn't you? It is truly pathetic that the fools in Aleswell actually trusted you to save them. Now get out of my sight before I make you sorry you meddled in my affairs."

Understandably, the hard-proven citizens of Aleswell are not as excited with his exploits. The innkeeper, Diram Serethi, will tell you the full story: "He's a wizard who took up residence in the ruins of Fort Caractacus a couple of years ago. He's caused us no end of trouble with his magical experiments, but nothing as bad as this. We've tried to find him, but had no luck. If he's still living in the fort, he's hiding from us, and no wonder. If you could find him and get him to remove this cursed invisibility, we will all be in your debt."

Upon successful completion of the quest, each and every inhabitant of Aleswell will reflect on Ancotar and his "experiments". Diram Serethi will still be quite angry with him: "We haven't seen him since that whole invisibility mess. I hope it stays that way!" His sister, Adosi Serethi, will have the following observation: "Typical Altmer. Thinks the whole world is made for his convenience. If I had my way, we'd go down there and burn him out. Let him find some other place for his little 'experiments.'" Also, Urnsi Serethi will chime in: "If he's smart, he'll keep out of my way. High elf and a mage to boot, the worst kind of arrogance." Aleswell's sheep herder, Sakeepa is a bit more forgiving than the others: "I say live and let live. It was an unfortunate accident, and he helped make it right. Others in the village are not so forgiving, though. I don't blame him for keeping to himself." The town's last inhabitant, the Orc farmer Shagol gro-Bumph is not as forgiving: "Don't get me wrong, some of my best friends are elves. But self-important jerks like Ancotar give them all a bad name."

Ancotar himself knows very well what the villagers may think of him: "I'm glad you were able to help them. I would have done it myself, but I like being invisible. Besides, I don't know if they'd have been happy to see me." and "I'm glad to hear that the villagers aren't invisible anymore. It will make it easier for me to avoid them."