Oblivion:A Knife in the Dark

You may overhear a rumor spreading in Cyrodiil about the recruitment of the group of assassins known as the Dark Brotherhood: "They say that when you murder someone, the Dark Brotherhood comes to you in your sleep. It's how they recruit new members." This means that in order to become recruited by the Brotherhood, you must murder an innocent in cold blood. Once you have completed that, the cryptic message "Your killing has been observed by forces unknown..." will appear in the corner of your screen, indicating that the next time you sleep in any given location, you will be visited by a member of the Dark Brotherhood. For suggestions on potential targets to murder, see this page. 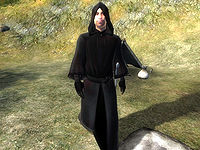 "You sleep rather soundly for a murderer."

After taking an innocent life, the next time you sleep you will be awoken to find a mysterious man to appear at the foot of your bed, whispering: "You sleep rather soundly for a murderer. That's good. You'll need a clear conscience for what I'm about to propose." He will then introduce himself as Lucien Lachance, a Speaker for the Dark Brotherhood itself.

He will then propose an opportunity to join the ranks of the Brotherhood... at a price. Responding to his proposal, he will continue to explain what must be done in order for that to happen: "On the Green Road to the north of Bravil lies the Inn of Ill Omen. There you will find a man named Rufio. Kill him, and your initiation into the Dark Brotherhood will be complete. Do this, and the next time you sleep in a location I deem secure, I will reveal myself once more, bearing the love of your new family." Lucien will hand you a personal gift, the Blade of Woe, and will elaborate on its meaning: "It is a virgin blade, and thirsts for blood. May it serve you well, as does your silence. Now, I bid you farewell. I do hope we'll meet again soon." Before he leaves however, Lucien will then send you on your way with these final words: "Your path is clear. Send Rufio to his death, and the Dark Brotherhood will embrace you as family."

Lucien will then cast a chameleon spell on himself and leave the area, allowing you to decide whether to ignore his request and never be contacted again until it is completed, or accept his request, travel to the Inn of Ill Omen, kill Rufio, and embrace your new family.

An Ill Omen for Rufio 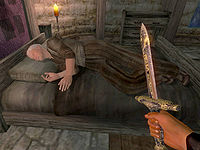 ... as Rufio prepares for eternal sleep

If you choose to accept Lucien's request, you must now travel to the Inn of Ill Omen, which is situated between the Imperial City and Bravil along the Green Road. Upon entering the inn, you may choose to speak with the inn's owner and publican, Manheim Maulhand, about Rufio. Manheim will openly tell you the location of him: "Rufio? He's an old codger. Been living here for a couple of weeks now. If you ask me, he's hiding from something. But what do I care? He pays his tab. His room is downstairs, in what I like to call the Private Quarters. Use that hatch in the floor over there. But don't expect a warm reception."

You can find the entry to the basement, immediately to your left as you enter the inn on the floor. You can usually find Rufio in the room at the very end of the corridor, either wandering about in his room or sleeping. If you initiate conversation with him, Rufio will admit killing either Claudius Arcadia's wife or daughter during a struggle during an attempted rape: "No! Please! I didn't mean to do it, you understand me? She struggled! I... I told her to just stay still, but she wouldn't listen! I had no choice!" which suggests that Rufio knew of his crimes and is far from the innocent old man he appears to be. If you choose to investigate Claudius Arcadia's house located in the Talos Plaza District in the Imperial City, you can find the remains of the Black Sacrament used against Rufio within the basement, as Claudius' retribution for him killing his wife or daughter.

The Signing of a Covenant 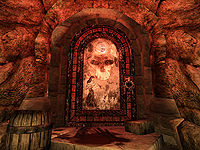 "What is the color of night?"

Once you have killed Rufio within the basement of the Inn of Ill Omen, Lucien will once again seek you out the next time you sleep, whispering: "So, the deed is done. How do I know this? You will find that the Dark Brotherhood knows a great many things. For you are now part of the family." He will then continue to explain: "The slaying of Rufio was the signing of a covenant. The manner of execution, your signature. Rufio's blood, the ink. As a Speaker of the Black Hand, I directly oversee a particular group of family members. You will join that group, and fulfill any contracts given. You must now go to the city of Cheydinhal, to the abandoned house near the eastern wall. Enter the basement, and attempt to open the black door. You will be asked a question. Answer thusly: "Sanguine, my Brother." You will gain entrance to the Sanctuary. Once inside, speak with Ocheeva. We must now take our leave of each other, you and I, for there is much work to be done. I'll be following... your progress. Welcome to the family."

Lucien will once again disappear, leaving you on your way to the Dark Brotherhood Sanctuary, hidden in an abandoned house in the eastern part of Cheydinhal. When you enter the abandoned house, make your way through the basement until you encounter the black door. Activating the door will initiate the question: "What is the color of night?" Respond with the passphrase: "Sanguine, my brother." and you will be granted access into the Sanctuary and begin your new life with the Dark Brotherhood.

Welcome to the Family 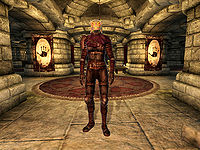 "Greetings! Greetings! I am Ocheeva, mistress of this sanctuary."

Once inside the Dark Brotherhood Sanctuary, you will meet your new family led by Ocheeva: "Greetings! Greetings! I am Ocheeva, mistress of this sanctuary. Lucien has told me all about you. Let me welcome you to the Dark Brotherhood! You stand in our sanctuary. May it serve as your new home, a place of comfort and security whenever the need arises. When you're ready for work, go and speak with Vicente Valtieri. He handles all assignments for the new family members. But before you go, please accept this gift from your new family. A unique set of armor, lighter than normal leather and black as the Void." She will then give you the armor of the Brotherhood: a Shrouded Hood and Shrouded Armor and will tell you to speak with Vicente Valtieri for new contracts until you prove yourself worthy. You are now directed to go and speak with Vicente Valtieri who will handle all the initial contracts at the beginning. Upon meeting him for the first time, he will remark: "Warmest greetings to you. I trust you've already spoken with Ocheeva? I am Vicente Valtieri. I provide assignments for all new family members. Please do not let my appearance... unnerve you. The needs and Tenets of the Dark Brotherhood come before my own needs as a vampire." 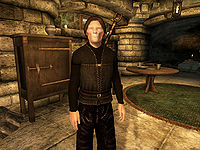 "Please do not let my appearance... unnerve you."

If you ask him, he will explain to you about what a contract is: "A contract is a pact one enters into with the Dark Brotherhood. They provide us with the gold, and we remove someone from existence. A contract is fulfilled by a skilled assassin such as yourself, who keeps the Dark Brotherhood's end of the bargain. So it has always been. While carrying out a contract, you may have the opportunity to earn a bonus if certain parameters are met." And if you inquire more about the bonuses offered during a contract, he will tell you: "Some contracts are straightforward. Find the target, eliminate them, then return to the Sanctuary. No time limits or complications. However, many of our clients request that their contracts be carried out in a specific manner. A certain place, a certain method of elimination. We try to honor this requests whenever possible. After all, the Dark Brotherhood's reputation has been built on providing... good service. Any Brother or Sister who can complete a contract while fulfilling a specific request will receive a valuable bonus, oftentimes a powerful magic item." Once you accept your first contract from Vicente, the quest A Watery Grave will begin.