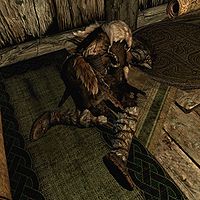 This Bandit is a male Khajiit found in Redwater Den in one of the booths set up for enjoying Redwater Skooma. He is lying on a bedroll coughing, surrounded by empty skooma bottles and will never move from it. If you attempt to interact with him, you will receive the message "This person is busy." He wears leveled light armor, leveled light boots, and has a 50% chance of wearing leveled light bracers.