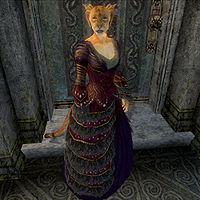 Ahjazda, a Khajiit enchantress, is the owner of Things Found, located in Crucible, New Sheoth. She is quite paranoid and will ask you to retrieve three items for her so that she may prepare for "The Coming Storm." She has 1000 gold but a Mercantile skill of 6, which means you can push hard bargains with her. She will buy books, alchemy apparatus, potions, magic supplies and miscellaneous items while selling only apparatuses, ingredients and books.

Although she is making preparations for an imminent catastrophe, that doesn't stop her from running her store on a regular day-to-day basis. At 8am, she unlocks the door of the ground floor and for the next ten hours offers bartering services for any customer who might pop in. At 6pm, two hours earlier in comparison to most shop-keepers, she locks up the front door and heads to Common Treasures in Bliss for a two hour dinner on the top floor. After eating, she goes straight back to Things Found and finds her bed but is so tense that she only sleeps until midnight. She then exits the shop and takes a night stroll in the northern part of Crucible until 4am, when she heads back to her bed for four hours of sleep.

She wears standard upper-class Dementia clothing: a Red Finery. Her only other possession is her shop key. She is a rather peaceful character and doesn't wield any weapons or use any spells, relying solely on her fists if things get bad.

The townsfolk of Crucible have noticed the paranoid Khajiit and her desire to collect weird things in preparation for judgment day. When asked about rumors they will say: "Ahjazda thinks the world is ending tomorrow. She's been saving magic items just in case." and "Ahjazda in Crucible believes the world is ending." Even in the many villages and settlements outside New Sheoth, people have heard about her doomsday prophecies: "There is a Khajiit in Crucible who believes the world is about to end."; while Halion will comment: "Ahjazda in Crucible believes the world is ending. She seeks all sorts of items to weather the storm portending." On the subject of Things Found, the townsfolk seem divided. Some will tell you that "You can find some good deals at Things Found. Ahjazda has an interesting collection." and "You'd be surprised what you can find there." Others will instead joke about her selection: "Things Found? More like Things Found in the Trash." or "A bunch of junk. That's what it is." and "There's no reason to shop in that dump." Halion will rhyme: "Something lost upon the ground? It's likely to show up at Ahjazda's Things Found." and "When shopping there search every nook, you'll never know what you'll find until you look."

The first time you meet her, she will greet you by saying: "So much to gather, so little time. Perhaps you can help? You might help against the coming storm." When you inquire further she will tell you: "It's coming. I think I'm the only one who sees it, though. And I'm going to be ready. Oh, yes. I'll be ready." and "That's right. I've been stockpiling supplies. Things I'll need to ride it out... or survive when they come for me." If you tell her you think she's paranoid she will answer with spite: "Am I? Am I? It's not paranoid when they're really out to get you. That's why I've been stockpiling supplies. I'll be ready."

When you agree to help her she will say: "I've been gathering things for quite a while, but there are still a few I'm missing. Perhaps you'd bring them to me? I still need the Amulet of Disintegration, the Ring of Desiccation, and, of course, the Calming Pants. Must have the Calming Pants. Bring these to me, and I will reward you well. Ahjazda has many, many things." Questioning her again about the storm with yield another paranoid answer: "Something big is coming. The end of it all. And I'm going to be ready." Asking about 'supplies' at this point will have her say: "Let me know when you've found what I need." If you talk to her again she will eagerly ask: "Have you found anything for me?" If this answer is no, she will tell you to hurry: "Let me know when you have something for me. Not much time left, I'm afraid. Not much time at all."

When you bring her the items she will be overwhelmed with joy and will thank you and provide an explanation as to why she need that particular item:

If you deliver the items one at a time, you have to admit that is all for now: "Fine, but hurry back when you do! It's coming soon. I can tell!" Finally, when you remark that this is the last item she wanted, she will teach you the greater power Ahjazda's Paranoia with the words: "It is! It is! You've done so well! You deserve a reward! Let me teach you a special spell. It will effect all those around you. You might find it handy to cause confusion in your enemies. You know... when the time comes."

After you have completed the Main Quest she will greet you with a humble "An honor, Lord." and proceed with a request: "Lord Sheogorath, I trust you'll protect us from the impending apocalypse." She will bid you farewell with the words: "It is good to see you, Lord."

Ahjazda also can't help but mention the apocalypse when bartering: "The world could come crashing down around us any day now. Never know what might save your hide, so I've got a bit of everything.", "Please, look. Buy. Something here might save you when the end comes." and "I've been storing things for when the end comes. You might find some of it useful." After the trade, she will say: "If the world hasn't ended, I'll be here. Come back again."

At different stages in the Main Quest, Ahjazda will share different rumors with other NPCs: