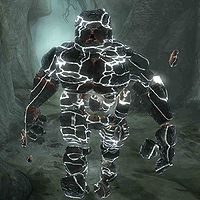 The Sunken One is the creature that Slythe Seringi holds responsible for the destruction of Kvatch. His apparent devotion to the creature leads to an unfortunate result as the Sunken One turns out to be a variety of Storm Atronach. It resides at the bottom of Sandstone Cavern.

Unlike most quest-related monsters, the Sunken One will respawn. Therefore, it provides a useful, renewable source for Void Salts, even for low-level characters.