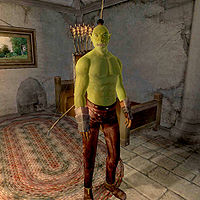 Shagrol gro-Uzug is an Orc warrior who travels to Battlehorn Castle after the Training Room upgrade is purchased, and runs the castle's Training Room. You can spar with him using your choice of a two-handed weapon, one-handed weapon or a dagger. He will attack you with your choice of weapon, but he is careful never to wound you, so this is a good way to train your Block skill. However, as he does no damage, your Light Armor or Heavy Armor skills will not increase. No bounty is received for fighting him in this way.

Shagrol wears laced leather pants and a pair of rough leather shoes. Shagrol also wears iron gauntlets. He carries three special weapons, a sparring warhammer, a sparring war axe, and a sparring dagger. These weapons all notably do no damage. Besides that he also has an iron bow with iron arrows. He carries a small amount of gold and a piece of mutton.

Shagrol sleeps between 1am and 7am in the large room he shares with Plautis Rusonius. He eats two meals a day: lunch is from midday to 2pm, and dinner from 6pm to 8pm. He eats somewhere close to the training room, which typically means either in his room or in the wine cellar. For the rest of the day he practices his fighting skills, switching between archery, hand-to-hand, or any of his three melee weapons. During this period of time he will also be available for sparring. While eating his midday meal, Shagrol will offer his services as a trainer of Block, but will always tell you that your level is too high (see below).