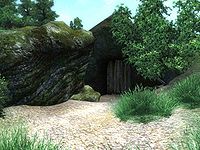 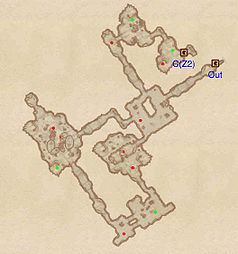 Newt Cave is fairly unremarkable and filled to the brink with Monster enemies. However, true explorers will find that the healthy amount of minor loot chests, all with a solid chance of enchanted equipment, makes for a profitable trek and the cave is quite easy to navigate. In the first room, pick the southwestern tunnel, jump down the hole, and fight the enemies on the lower level. The southernmost room contains a chest and a barrel with torches, and the next room contains another chest, this one locked. Proceed forward until you arrive in the first room again, then pick the northern tunnel for a few restoration chests guarded by monsters and access to Newt Cave Chapels of Light through door C. 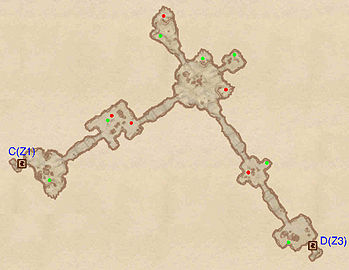 The Chapels of Light is almost entirely linear. Upon entering from door C, pry open the nearby chest and proceed to the next room, this time for a locked chest guarded by mud crabs. From the next chamber, three paths are available although two of them lead to dead ends. The northern path leads to a chest and the remains of an unlucky adventurer, still holding an iron war axe and a leather shield. The southern path leads down to the door at D, the entrance to Newt Cave Breezeways. 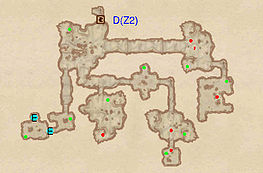 This zone is the most complex part of Newt Cave, but only because it demands a lot of backtracking if you want everything. From door D, multiple paths are available. The eastern path leads to two chests and up to three monsters; the southeastern path leads to a load of dead-end rooms, more monsters, and four minor loot chests (two of them locked). The last path leads to the southwestern area with two chests and two Dead Goblins, one of them seemingly dead from an overdose of beer (E). When all is said and done in Newt Cave, backtrack through all three zones and exit the way you came.