Goblins are the most common type of humanoid monster, and are treated differently from other monsters in Oblivion. The other monsters are all documented at Monsters. The goblins on this page are also all listed in the Oblivion-Creatures-Goblins category.

Goblins tend to live in groups in underground caves, abandoned mines and ancient ruins, the entrances of which are often guarded and decorated with at least one stake with human skulls on it driven into the ground. They are the most sophisticated creatures in the game, with many goblins having a rank and job in the group.

About half of the goblins belong to one of eight tribes. Tribes represent the high point of goblin culture in the game and follow several rules. In the case of seven of the eight tribes, each tribe has its own home base cave, shaman, war chief and tribal totem staff. All members of a tribe have a tribal symbol visible on their upper right arm. Members of any tribe hate members of all other tribes. However, they will tolerate goblins who do not belong to any tribes.

The shaman functions as a spiritual leader who guards the tribe's sacred totem staff. The totem is a magic staff that belongs to the tribe (although the totems all look identical, each tribe recognizes its own totem). The shaman rarely leaves the cave and does not respawn. If one is killed, the tribe is without a spiritual leader and will no longer go to war over their totem. Likewise, the goblins will become docile towards the player, and only attack in self-defense. Each tribe also has a war chief as their military leader. Stealing a goblin tribe's totem and hiding or placing it somewhere will not start a war though, due to distance restrictions built into the game. The only wars that occur without a mod are the ones in the Goblin Trouble quest.

The Bitterfish Tribe is the main exception to goblin tribal culture. It does not have a war chief, totem, or tribal symbol in the game. Another anomaly is that a Breton named Goblin Jim acts as the White Skin tribe's shaman.

When goblin caves are examined closely, insights into the level of intelligence and power of the eight goblin tribes can be found. Often, prison cells can be found within the lairs holding captives that the goblins may have been using as some sort of hostage, though they are most often dead upon arrival. Goblins display a basic recognition of currency and its use (evidence of this would be the level of care goblins go to to make sure their gold is safe and secure) The caves of goblins also appear to have rooms with individual functions and purposes, such as dining halls, religious centers, storage areas, points of social gathering, and sometimes rooms as definite as throne rooms, armories, and kitchens. It seems that the culture of goblins is advanced enough to be deemed somewhat "civilized".

Despite their intelligence, goblins are extremely hostile and generally respond with violence to any contact with the humanoid races of Tamriel. For the most part, though, goblins rarely venture far from their lairs except to embark on raids, be it on other goblins or unfortunate travelers or farmers. Raids seem to be the goblins' primary source of food, wealth, and equipment, as they have yet to be seen practicing agriculture or manufacturing on any apparent scale. The sole exception to this is their near-universal "domestication" of rats as a form of livestock, although the choice of rats may be one of necessity rather than preference.

These are the non-tribal goblins that are encountered in caves and ruins that are not occupied by any of the goblin tribes listed below. With these goblins, the type of goblin that you meet is determined based on your character's level, and is not related to any type of tribal structure. So it is possible for a single cave to be filled with multiple Goblin Shamans and Goblin Warlords (unlike tribal goblins who have exactly one shaman and one war chief).

The following table summarizes the leveled lists that are used to generate generic (i.e., non-tribal) goblins.

The editor names of the leveled lists that are covered by this table are as follows:

Although superficially the Bitterfish Tribe may appear similar to all the other goblin tribes in the game, it is really a tribe in name only. This tribe does not have a totem staff and does not have a tribal symbol. They tend to carry Scales on their person. It is made up of randomly generated goblins who do not have any tribal relationships (either with each other or with other tribes). There is no Bitterfish war chief. Whether you encounter a Bitterfish shaman is randomly determined; if you revisit Miscarcand multiple times it is possible to kill multiple Bitterfish shamans. All other tribes have exactly one shaman and one war chief, although only the shamans are non-respawning. 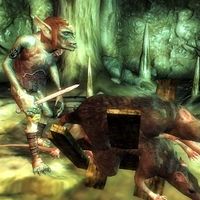 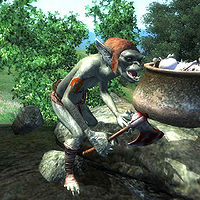 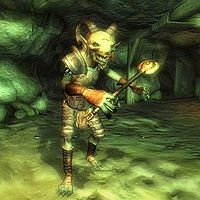 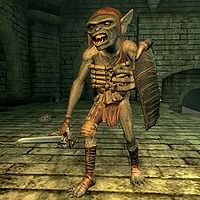 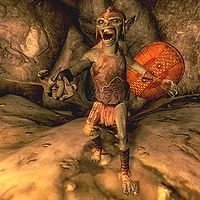 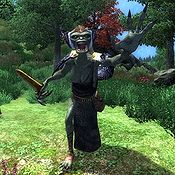 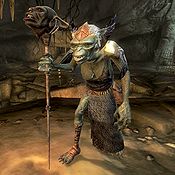 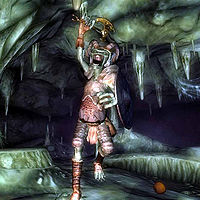 When adventuring you may encounter dead Goblins clutching bottles of alcohol that have apparently drunk themselves to death. There are several spread across Cyrodiil: