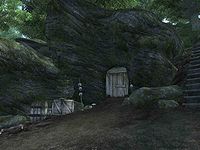 Haunted Mine is a medium-sized mine southeast of Bravil and northeast of Leyawiin containing goblins. It contains two zones: Haunted Mine and Haunted Caverns.

Despite its name, Haunted Mine actually contains a large amount of Goblin opposition. However, a fairly large amount of minor loot chests makes it well worth exploring. Upon entering, proceed through a short tunnel to reach the first room containing a minor loot chest guarded by a nearby foe. Proceed forward and head straight at the intersection to loot a chest containing potions; watch out for the Tripwire at E that activates a Swinging Mace (D). Backtrack to the intersection and head through the wood door to reach the next room; loot the silver vein on your immediate left and take care of the two foes inside the room. After defeating the opposition, push the loose planks at F to reach a minor loot chest in the south part of the room. Loot the other chest in the room and proceed ahead to the next room containing a chest guarded by one foe; defeat the enemy and loot the potions from the chest. Proceed south and loot the chest inside the room with an unlucky rat on a table. Backtrack to the previous room and head through the wood door to enter a tunnel system; at the intersection, head north to reach a small room with a single foe and a chest hidden behind the woodwork. Backtrack to the intersection and follow the other tunnel to reach the last room in this zone which contains a locked minor loot chest. After looting the chest, locate door C and enter it to proceed into Haunted Caverns. 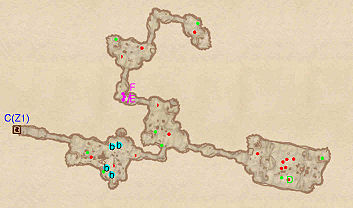 Shortly after entering this zone, you will find yourself in a fairly large chamber with no less than one foe guarding the area. Take care of the opposition and loot the two chests and the silver vein in the room; both contain minor loot but the chest near the bedrolls at b is locked. Continue forward to the next room which contains two minor loot chests guarded by at least one nearby foe. At this point, you can head either head east or west. Heading east will take you to a rat farm, complete with a Goblin Rat Farmer, six rats, some vegetables at D, a silver vein, and a minor loot chest in the far east end of the room.

If you head west, you will find yourself in a tunnel system; watch out for the Tripwire at F that activates three Swinging Mace traps (E). At the end of the tunnel, you will reach a room containing up to two foes; defeat the opposition and loot the minor loot chest under the table that has a less than lucky rat on it. Proceed forward to reach the last room of this path which contains a silver vein, a chest, and a final enemy; defeat this foe and loot the potions from the chest along with the silver vein. Once you have explored both paths, you will have to backtrack to the entrance and leave through door C to head back into Haunted Mine.