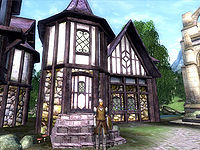 The corruption started when the new captain of the guard, Ulrich Leland, arrived in Cheydinhal. Ask about "Rumors" in Cheydinhal and you'll learn the topic "Fines." Ask about the exorbitant fines and you'll be directed to the outspoken Llevana Nedaren to help fight the corruption. She tells you to seek out Garrus Darelliun in the Count's Castle. When you talk to him, ask him about Ulrich. You'll need a disposition of at least 60 with him before he'll tell you anything. Garrus tells you that he needs a witness to be able to bring the case before the Count. He directs you to Aldos Othran, a local drunk that lost his house after being unable to pay the various fines imposed on him by Ulrich.

Save your game, as there is a possible bug that can happen here. After you mention Ulrich to Aldos, he tells you to follow him. He walks up to his house and starts berating a guard. After a short discussion he pulls a knife and the guard kills him. Your quest journal now indicates that you need to talk to Llevana again. After you talk to Llevana she snaps and tells you to bring Ulrich to her. She tells you to inform him that she has "information that incriminates him" and she'll "take care of him" when he arrives. Before you talk to Ulrich, visit Garrus again. He proposes an alternate plan; you are to sneak into Ulrich's quarters (located in the Cheydinhal Castle Guard Barracks), and look for evidence to use against him. Garrus gives you a key and your journal indicates that you need to choose between the two methods. Both methods will yield one Fame point.

If you pick Garrus's method, you find a note in Ulrich's room (on top of a book on top of the dresser to the right as you enter) that shows he's been sending huge sums to his family and basically milking the town. Give this note to Garrus, and he runs off to the Count and tells you to meet him in the Cheydinhal Bridge Inn in two hours (possible bug triggering can happen now, see Notes section below for Bug Alert #4). When you meet Garrus at the inn he thanks you for your help and gives you a level dependent (see below) amount of gold. Ulrich is incarcerated in the town dungeons indefinitely. Garrus is then promoted to Captain of the Guard.

If you pick Llevana's method, lead Ulrich to her house. Inside, they talk for a bit, then she paralyzes him and summons two Tunnel Rats to eat him. Once he's dead your journal is updated. Talk to Garrus, who admonishes you for choosing bloodshed but gives you a level dependent amount of gold since you acted for the good of Cheydinhal (less gold than if you choose the non-violent method). You can loot Ulrich's body for free though. Llevana goes to jail, and Garrus gets promoted to Captain of the Guard.

There is a third option that neither Llevana nor Garrus would have dared to suggest: seek justice by your own hand. At this stage, slaying Ulrich yourself will complete the quest. Speaking to Garrus afterwards will result in him berating you for such a murderous choice and you will get no gold. Depending upon how Ulrich dies, you risk a bounty or jail time for your action.