Unbeknownst even to himself, Martin was the bastard son of Uriel Septim VII, and the last heir to the Ruby Throne. He alone could use the Amulet of Kings to light the Dragonfires that wards the barrier between Tamriel and Oblivion, and save the world from the Mythic Dawn plot. — The Oblivion Crisis

Martin Septim was the illegitimate son of Uriel Septim VII and a mysterious mother.[nb 1] Martin was spirited away as an infant by Jauffre, the Grandmaster of the Blades.[1] Martin grew up knowing nothing of this, and eventually became a Priest of Akatosh in the city of Kvatch. That was where he found himself when his father and half-brothers were assassinated by the Mythic Dawn, leaving him as the unwitting sole heir to the Ruby Throne at the onset of the Oblivion Crisis. Blades agents were able to find Martin and keep him safe until the end of the crisis, when the uncrowned Emperor of Tamriel was forced to sacrifice himself to stop Mehrunes Dagon.[2]

Uriel VII asked Jauffre for updates on Martin's progress from time to time,[1] but that was the extent of the Emperor's relationship with his son. That is, until the 27th of Last Seed, the year of Akatosh 433, when the Emperor gave his final instructions to a prisoner he had just met: to find his son, and close shut the jaws of Oblivion.[3]

Martin grew up thinking his father was a farmer. He worshipped Sanguine for a time as a young man, and learned much about the magic of daedra. At one point, he briefly possessed the Sanguine Rose.[nb 2] Martin eventually turned away from daedra worship after a tragedy befell him which involved the deaths of several friends. He rededicated himself to the Nine Divines and became Brother Martin, a Priest of Akatosh at Kvatch's Chapel of Akatosh.[4] When the daedra attacked Kvatch, he joined others in barricading themselves inside the Chapel, and he reportedly saved many lives.[5] The prisoner Uriel VII had trusted, newly minted as the "Hero of Kvatch" for closing the Oblivion Gate at the city, persuaded Martin to come with him to see Jauffre.[6]

Martin and the hero found their way to Weynon Priory only to discover it was being sacked by the Mythic Dawn. They arrived just in time to save Jauffre, but the damage was done: the Dawn found and stole the Amulet of Kings. Jauffre led Martin to the safety of Cloud Ruler Temple, the most secure fortress of the Blades in all of Cyrodiil, where they hailed him as Dragonborn.[7]

From Cloud Ruler Temple, Martin led the effort to unravel the Mythic Dawn's plans and reacquire the Amulet of Kings. Though unsure of himself, he ironically found great strength in his darkest demons, as his experiences with daedric magic had made him well-educated on the nature of the crisis they faced.[8] He proved quite adept at assessing the threat and working out plans to turn the tables on their enemy. When the Hero of Kvatch brought him the Mysterium Xarxes, he was able to protect himself from its evil magic and learned enough from it to devise a plan to track down Mankar Camoran and take back the Amulet of Kings.[9]

Eventually, at Martin's request, Countess Narina Carvain of Bruma allowed a Great Gate to be opened outside her city, and Martin led the defense of the city himself while his champion, the Hero of Kvatch, entered the gate to recover the materials they needed to reach Mankar and the Amulet. When the hero emerged from the closing gate, it was as the Savior of Bruma. Martin opened a portal to Mankar Camoran's realm of Paradise, and the Savior of Bruma entered to reclaim the Amulet. As always, Uriel VII's chosen messenger got back to Martin victorious.[9] 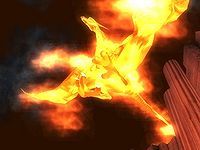 Martin as the avatar of Akatosh (Oblivion)

With the Amulet in hand, Brother Martin was proclaimed Emperor Martin Septim I by High Chancellor Ocato, but before he could actually take the throne or be crowned, Mehrunes Dagon launched a last-ditch attack upon the Imperial City to stop him, opening Oblivion Gates all over the city and manifesting personally as a red, four-armed, colossal giant. The veil of Oblivion was torn, the Dragonfires rendered useless, and Dagon himself stood in the heart of Tamriel, intent on its destruction. But his plan would prove fruitless, for once again, Martin had a better one.[10]

Martin and his escort fought their way from the White-Gold Tower to the Temple of the One, where Martin shattered the Amulet of Kings, transforming himself into an avatar of Akatosh. Dagon was handily defeated, after which the avatar turned into a statue at the center of the ruined temple. The enormous feat cost Martin's life to perform, but his sacrifice ensured that the forces of Oblivion could never again threaten the people of Tamriel.[10] Of course, conjecture about what actually happened is rampant,[2] and others have tried to take credit for ending the crisis, but Martin Septim is still generally, and rightfully, acclaimed as the true savior of Tamriel.[11][12]