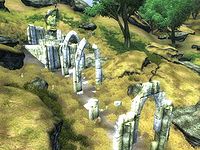 Colovia is the western part of Cyrodiil and is known for its austere, martial culture and rugged population of Nordic descendants.[1] The borders have moved over time, but in the Third and Fourth Era the region comprised Anvil, Chorrol, Kvatch and Skingrad counties,[2] and the Imperial Reserve. Back in the first and second eras, the modern Skyrim hold of Falkreath was, at times, included as one of several kingdoms making up western Colovia.[3]

Most of the population in the later eras resides in the cities of the south, although there are scattered farms and settlements throughout the area. The region around the sea port of Anvil is known as the Gold Coast. The region around Skingrad is known as the West Weald, and is well known for its vineyards and tomato farms. The city of Kvatch lies on a rocky outcrop between Anvil and Skingrad, with the Colovian Highlands stretching away to the north. The city of Chorrol is the main population center in the northern part of Colovia, a hilly, forested region sandwiched between the Great Forest and the Colovian Highlands.

The Colovian region has traditionally contributed its sons to the Imperial Legion, making up the bulk of its ranks in native legions. The progenitors of the Second and Third Empires, Reman I and the Emperor Zero Cuhlecain, also hailed from Colovia.