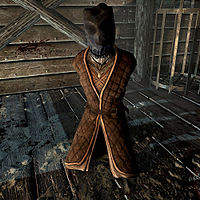 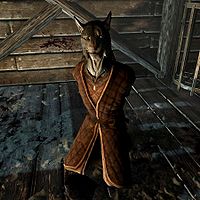 Vasha, a Khajiit warrior, is one of the three hostages in the With Friends Like These... quest. You first encounter him in the Abandoned Shack.

He claims that he is an "Obtainer of goods, taker of lives, and defiler of daughters." The nature of the encounter implies that he is either a merchant, soldier, and womanizer, or a thief, murderer, and rapist. Of the three hostages, he is the only one who actually remains calm when faced with his imminent death.

He wears a set of fine clothes and fine boots, and also an execution hood.

He will tell you who he is, should you ask. "Ahhh... Vasha, at your service. Obtainer of goods, taker of lives, and defiler of daughters." He will also threaten you for your ignorance, saying, "Have you not heard of me? Perhaps I will have my people carve my name in your corpse, as a reminder." Asking him if someone would pay to have him killed will be responded to with incredulity: "Me? Ha! Are you serious?" You have two dialogue options:

"Answer me, or I'll paint this room with your blood!" (Intimidate)
"Fool! Don't you get it? I live in the shadow of death every day. A knife in every doorway, a nocked arrow on every rooftop! If one of my enemies wouldn't pay to have me killed, I'd take it as a personal insult."
"Come on, you can tell me. We're all friends here." (Persuade)
"He he he he he he he. The real question is, "Would someone pay to have me killed... again." A day goes by without someone trying to gut me in the street, I get disappointed."

"The conniving Khajiit. Cat like that was sure to have enemies. It's no wonder you chose him."
"The timid warrior and the sly Khajiit. Must have been one or the other, right?"
"Hmm. The fearless wife and mother, and the underhanded Khajiit. Had to be one of them, right? Interesting choice."

If you choose to kill Astrid instead, you can choose to listen to Vasha saying, "Come now, my friend. Haven't we played this game long enough? Untie me, and we can all go our separate ways." You can cut his bonds, to which he'll comment, "Ah, you see? That wasn't so hard, now was it? Let's the two of us just forget we ever met, hmm?" Any time you talk to him after release, he will thank you with "Ah, sweet freedom. Now that's more like it. You have my thanks, stranger."