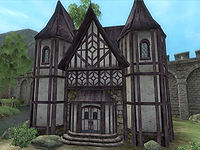 Willow Bank is a large house located in Cheydinhal.

It is the home of Eilonwy and Orintur. Orintur claims to divide his time between the Cheydinhal Mages Guild and pursuing his private studies in Willow Bank but in fact he never sets foot in Willow Bank except right at the start of the game. His wife, Eilonwy, never enters the building either. Both of them carry the key to the front door, which is locked with a hard lock.

On the ground floor as you enter are two chests, a crate, various barrels and a cupboard, all containing minor loot. As you climb the stairs to the second floor, there is a table with two strong potions of health upon it. The bedroom upstairs includes a set of drawers on top of which is Incident in Necrom, an Illusion skill book, and a jewelry case with a leveled lock. The basement area reveals two wine racks with six bottles of Surilie Brothers Wine, five bottles of Tamika's West Weald Wine and a single bottle of Surilie Brothers Vintage 415. The unlocked chest contains up to three pieces of randomly chosen equipment.