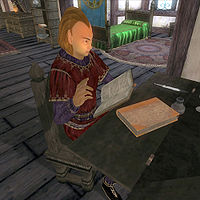 Orintur in the Cheydinhal Mages' Guild

In actual fact, he is never seen home, preferring to spend most of his day at the Guild Hall. However, when he has free time, he does choose to occasionally leave the stuffy confines of the Guild, unlike most other Mages' Guild residents. His typical day will start at 8am when he wakes up. From then until 5pm he will be found wandering around the Guild building. He will occasionally break off to study the rare tome The Last King of the Ayleids for three hours in one of the available chairs on the second floor. He leaves at 5pm for a three-hour sunset walk and can be found admiring the panorama while strolling on the small island in the middle of Cheydinhal's river. At 8pm he returns to the guild, where he eats a two-hour dinner with his fellow guild members in the east-wing dining area. At 10pm he retires to sleep in his bed on the second floor. He will offer his services only when reading. Together with his wife, he attends the weekly parties held on a Loredas at Riverview, where he will be found eating between 8pm and 10pm and then conversing with the other guests until midnight.

He wears upper-class attire consisting of a red velvet blouse, red velvet garment and a pair of gold trimmed shoes. He also carries his book, his key and a sizable amount of gold. He doesn't wield any weapons, relying instead on a set of medium-high Alteration spells. These are the same spells that you can buy cheaply from him, since his Mercantile is a mere 7.

He shares his wife's views about their relationship and when asked about Cheydinhal he will say: "I'm very fond of Cheydinhal. It's where I met my love, Eilonwy. Our lives are quite long, and choosing the right partner is very important." If you haven't joined up, he will advise you that "The guild offers access to spells you can't find anywhere else. See Falcar here in town if you'd like to join." If you already are a member, he will comment on fellow spell merchant Trayvond's ability: "Trayvond has the best shield spell outside of the Arcane University. If you can cast it, it's definitely worth adding to your selection." As a matter of fact, Orintur himself is the only vendor outside the University that sells the Journeyman, Expert and Master spells of the Shield effect.

He isn't the only one mistaken however; his wife is so blindly in love with him that she will tell you: "Orintur doesn't like to brag, but no one can match the Reflect spells he can cast. He might teach you one, if you're skilled enough." Actually, Reflect is a Mysticism effect and Orintur only sells Alteration spells. She is so proud of him that even when introducing herself, she gives him top billing: "I'm Eilonwy. I'm only a conjurer, but Orintur is a full Magician. Isn't he wonderful?" and follows that up with "Perhaps it seems silly, but our love is the most important thing in all creation. Orintur and I spend all our time together, in the High Elf way." Other people around town have noticed the happy relationship between Orintur and his wife and will ask each other "Have you seen Orintur and Eilonwy recently? They're always together" and "Have you ever seen a couple more in love than Orintur and Eilonwy?"

On the subject of recommendations he will say "You'll need to see Falcar about that." Once Falcar has given you your task, he will comment "Falcar gives out the strangest assignments. It's as if he doesn't really care about them."