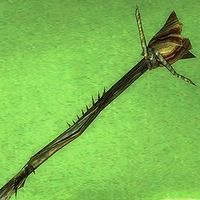 The Daedric artifact Sanguine Rose is a staff awarded at the end of Sanguine's Daedric quest. It looks like a normal staff with a rose made of wood at the top and with thorns coming from the base.

It summons a random Daedra who attacks the person or creature targeted by the spell (the spell must hit a person/creature in order to work). The creature can be any type of Daedra. If you are lucky enough to summon a Xivilai, the Xivilai will also summon a Clannfear as soon as it spawns. After killing all enemies in the area, the Daedra may turn on you, but it only exists for 20 seconds before disappearing, and can be prematurely canceled by using another summoning spell.