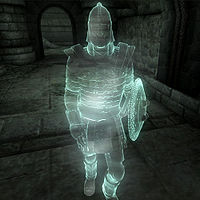 The ghost of Alain

Alain was a Breton Blades knight who has been trapped as an undead creature imprisoned in the ruined fort of Sancre Tor. You will need to release the Ghost of Alain as part of the main quest.

Alain wears a complete set of Blades armor; helmet, cuirass, gauntlets, a shield, greaves and a pair of boots. He wields an akaviri katana and carries a small sum of gold.

Once free, the ghost will greet you by announcing "I was Alain, loyal Blade of Emperor Tiber Septim. I do not know how long I have been dead. It feels like an eternity." On subsequent greetings, he will angrily tell you to "Stand aside in the name of Tiber Septim and the Blades! Hinder me at your peril!"

The only real rumor about Alain comes from Jauffre, who will tell you that "The four mightiest Blades of Tiber Septim's day, Alain, Valdemar, Rielus, and Casnar, went to Sancre Tor and never returned.", although Casnar will ask "Have you seen Alain or Valdemar? Rielus fell in the lower chamber."