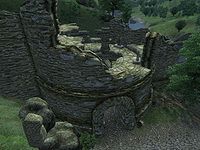 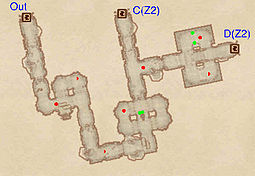 This zone is primarily used to get deeper into Fort Empire, where the Boss chest is located. This zone has two doors at its end leading into zone 2 of the Fort (C) and (D). Door (C) involves fighting fewer NPCs, but if you take this path do not forget to go back and collect the items located in the two chests near door (D). Also, The interior of the fort has a rather large number of enemies compared to the amount of treasure found within, so make sure that you find all four of the chests if you intend to fight all the monsters.