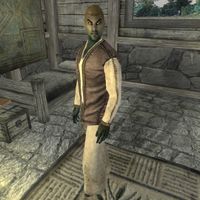 Bongond is a Dunmer ostler who sells Chestnut horses at the North Country Stables outside Chorrol.

He wakes up at 6am and walks around the interior of the stable for two hours before unlocking the doors and opening for business at 8am. Bongond spends the morning wandering around the house and then sits down for lunch at midday, eating for two hours. The afternoon is also spent waiting for customers and then at 6pm he stops to eat dinner. At 8pm he locks the doors of the stable and then wanders about again until he heads back to bed at 10pm. Bongond will sell horses 24 hours a day, but the door to the stables will be locked outside the regular opening times.

Bongond wears a set of common middle-class clothing consisting of a brown shirt with matching light brown linens and a pair of rough leather shoes. In combat, he relies on an iron shortsword. He only carries a sparse amount of gold.

The first time you talk to Bongond, he gets straight to the point: "I run the North Country Stables. Are you interested in a horse?" If you ask for further details about horses, Bongond enthuses about his stock: "There are no finer Chestnut horses to be found anywhere in Cyrodiil. They are not as hardy as most, but only the Black horse is faster." If you buy one, he will reply: "I knew you had a good eye for horses! Go out to the stables. Nardhil will have the Chestnut saddled and ready for you."; if you can't afford it, he will commiserate by saying: "Too bad. You won't find a better Chestnut horse anywhere in Cyrodiil." and if you decline, he will say: "What a pity. If you change your mind, we have a fine selection of Chestnut horses."

People in Chorrol will ask each other: "Have you ever bought a horse from Bongond?", although they seem to have a higher regard for his horses than for Bongond himself: "You know, Bongond has got some fine horses for sale over at the Grey Mare [sic]. Too bad he's such a pushy man."