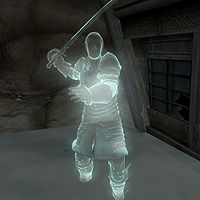 The Black Rock Captain is the ghost of the master of a sailing ship that has somehow come to rest in a hidden zone of Black Rock Caverns. He and his crew now haunt the cave in which they spent their final days, spending eternity wandering around the wreckage of their vessel.

Although the captain is in the Marauder faction, he dresses more like a bandit, with leveled light boots, greaves, a cuirass, and gauntlets. He wields a steel cutlass.

As a ghost, he has 100% resistance against disease, poison and frost, and cannot be damaged by normal weapons. In addition, he can walk on water. Another ghostly ability is his "Ghostly Touch" spell, which damages fatigue by nine points and drains it by 18 points, as well as inflicting 10 points of frost damage. He can also become invisible for 15 seconds. Neither the Ghostly Touch spell nor his invisibility can be disabled by silence spells. In addition, the captain possesses one leveled Restoration spell.