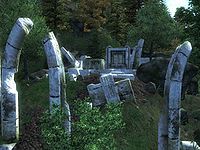 Anga is a small Ayleid ruin between the Imperial City and Bruma containing NPCs (quest-related). It contains only one zone, Anga.

The ruin has several inscriptions in the Daedric Alphabet dedicated to Namira. 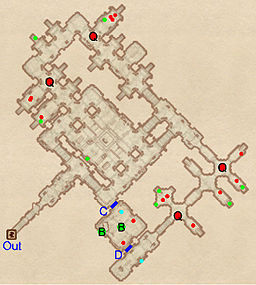 The four Priests of Arkay, who are your targets for Namira's quest, are spread throughout the dungeon (all at Q). Each one conveniently has a cluster of three Forgotten Ones nearby, who are ready to attack the priests given the opportunity (i.e., darkness courtesy of Namira's Shroud). Be sure to not kill the priests or any of the Forgotten Ones yourself if you want to successfully finish Namira's quest.

The boss-level ayleid reliquaries (B) and the only undead in the dungeon are in a hidden room. It can be accessed by opening the hidden door at D using the push block (cyan dot on map). Opening the second hidden door at C by stepping on the pressure plate provides a quick shortcut back to the entrance. The undead are the only occupants of this dungeon who will attack you (without being provoked).