Ficheiro:Racemap05S-Morrowind.jpg
The province of Morrowind

"Finally the bones of Horde Mountain landed and became the foundation stones for the City of Swords, which Vivec named after his own sigil, and the net fell across it all and between, or became as bridges between bones, and since its segments had been touched by his holy wisdom they became the most perfect of all city streets in the known worlds." — Vivec

Vivec City (often shortened to simply Vivec), named after the god of the same name, was the largest city in Vvardenfell, once situated on its southern coast in a large lagoon. The city was a collection of nine artificial islands; each island was a separate district or canton and was made up of a large multi-tiered building the size of a small town. The many bridges and walkways between these cantons created a maze that could be intimidating for new arrivals. Water was the dominant element in the architecture, present even inside. The entire city of Vivec was considered a holy place, as it was home to the Living God Vivec himself. The city was policed by special guards drawn from the militant order of the Temple, the Ordinators.

Most cantons were generally built of four tiers. The lowest, only accessible from drainage grates or trapdoors, was the Underworks, or the canton's sewer. The Underworks were located on the water-line, and were a nest for criminals, rats, and other undesirables, as Ordinators never ventured into them. Above the Underworks, at the level of the main walkways and canals, were the Canalworks, where tombs, homeless paupers, storage rooms, and a few small shops could occasionally be found. The Canalworks of a canton were generally only accessible from the upper levels, or via trapdoor from the Underworks. Above the Canalworks were the Waistworks, filled with shops, clubs, temples, and residences. The top of a canton contained a large domed courtyard known as the Plaza, with standalone buildings rather than doors built into corridor walls. Canton plazas were filled with manor-houses and fine shops, and could usually only be accessed through large doors from the exterior. All of the space within a canton had to be leased from the Temple, and the only Guards allowed to police the area were Ordinators.

The first of these cantons from the Vivec landing on Vvardenfell's mainland was the Foreign Quarter, the entrance to Vivec. Originally, this was as far as outlanders were allowed into Vivec, although this law was repealed long before Vivec's destruction. The Foreign Quarter housed the Mages and Fighters Guilds, a cornerclub containing the Thieves Guild, a small Imperial Cult shrine, a tomb, and many shops. It was also the largest canton in the whole of Vivec, having two Waistworks levels, once known as the Lower and Upper Waistworks.

Three of the next four cantons were under the control of the three Great Houses that had land on Vvardenfell: Hlaalu, Redoran, and Telvanni. Each of these cantons represented the wealth of each Great House, and, as one might expect, housed shops, services, and lodging for House members. The cantons also each had a small individual temple, and a large treasury, which contained numerous rare items, gems, and a significant stash of gold, all under heavy guard. 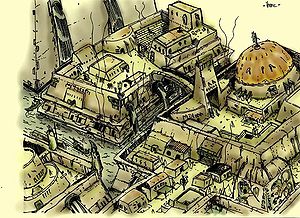 The fourth of this group of cantons was the Arena, where public entertainments such as comic plays or mock battles were held, along with any duels to honorably settle conflicts of interest or advancement. All fights there were special events; there were no routinely arranged fights or tournaments in the Arena. The Arena's plaza was taken over by the vast Arena Pit itself, and below the plaza were facilities for training, equipping, and lodging arena fighters, as well as a good sized storage complex.

The next two cantons were residential ones named in honor of two of the saints of the Tribunal Temple, Saint Delyn and Saint Olms. The St. Delyn Canton and St. Olms Canton provided low-cost housing to the commoners and paupers of the city, and also had nicer homes for the more affluent in their Plaza areas. Both cantons had several shops in the Waistworks, and small temples.

South of these two cantons was the Temple Canton, which was unique in its construction. The Temple canton was flat atop its canalworks, which were devoted to the Halls of Wisdom and of Justice. The Hall of Wisdom contained a large library of religious books, and many low- and mid-ranking members of the Temple bureaucracy worked there. The Hall of Justice housed all of the Ordinators in the city, as well as the various offices related to Ordinator activity throughout the district. Atop these halls was the cathedral of High Fane, once home of the Archcanon of the Temple, Tholer Saryoni as well as many other high-ranking Temple members. Above it hovered the Ministry of Truth, a hollowed-out moon housing prison cells for dissidents of the Temple. According to lore, Vivec himself stopped the moon from falling onto the city, and it was thought that it would remain hovering as long as people believe in the Tribunal.

Behind the Temple canton was the Palace of Vivec, the residence of the Living God Vivec. The Palace itself was a small if grand-looking one-room affair, but it was mounted on its own canton, which is built from five levels of sewers hiding a shrine somewhere in their midst, known as the Puzzle Canal. The door to the Palace was kept locked at all times, as access is by special invitation only, and no one but the Archcanon is normally allowed to speak to Vivec himself.

Due to Vivec's absence early in the Fourth Era, the Ministry of Truth finished its fall into the city of Vivec in 4E 5.[1] The rock, resuming its previous velocity and trajectory, crashed into and destroyed Vivec city, which caused the eruption of Red Mountain in what is known as the Red Year.[1] The area where Vivec's awe-inspiring cantons stood is now known as Scathing Bay because the rock opened up a fissure into an active underwater volcano.[2]