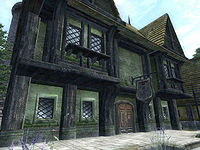 The Dividing Line is an armor and weaponry store in Leyawiin's Chapel District. It is found next to the Five Claws Lodge and Best Goods and Guarantees on the north side of town.

The proprietor, Tun-Zeeus, has 800 gold, a Mercantile skill of 40 and also offers repair services. When bartering, he will buy your armor, weapons and miscellaneous items while only selling the first two. Among his wares is the unique blunt, Destarine's Cleaver, with damage Strength and Endurance enchantments.

Along with Tun-Zeeus is Eitar, another smith who works in the forge and offers repair services and basic Armorer training.

The main trading room is on the ground floor and is decorated with deer heads and large selection of weapons on display on the counter. On the right side of the room is a working table with an anvil and a large pile of crates and barrels in the corner. On the left, just before the stairs, is a small room with some food and poison, a locked door leads to a small library. Tun-Zeeus lives upstairs, as is usual with Leyawiin houses and stores. His private quarters consist of a large antechamber which is used for storage and dining and second room with a single and double bed, both of which are owned.