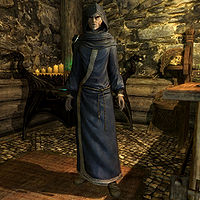 Wylandriah is the court wizard of Riften. She lives in Mistveil Keep and provides shop services for a variety of magical implements. She is quite eccentric, but obviously of keen intellect. Unfortunately she can't hold a train of thought and frequently forgets things, though according to the Official Game Guide, this is merely an illusion so that people will leave her alone.

Wylandriah wears blue mage robes and a pair of boots. She is armed with a random Destruction staff and also carries a selection of upper-class items and gold.

When near her, she may say, "Excuse my disorganization, but I'm in the middle of some delicate experiments." or "Did we have an appointment? No... was it a delivery? I can't remember." When you are tasked to retrieve some items for her, she may also greet you with, "I know you. Where was it? Hm. Oh! You were getting something for me?"

After you finish conversing with her, she will often utter, "Okay, now where did I put those spiders?" or "I have to remember... ward first, then summon."

Wylandriah will also direct you to where you can learn more about magic: "Winterhold. You want the College there. They teach quite a bit."

If you tell her that you'd like to invest in her store, she'll welcome the opportunity: "An investment? Very well, I don't see why not." After giving her the gold, she'll say, "Thank you. When I have the time, I'll try to think of how best to use this."

You may ask what she is preoccupied with, and she'll be glad to explain: "Someone actually interested in what I'm doing? Amazing! Well, allow me to explain. My experimentation involves a magical construct and a reagent that will allow the construct to maintain a field of permanent harmonic energy!"

You may reply in three ways to this:

"I don't understand a word of that."
"You don't have to, because it's utter nonsense. It's never going to work. No, no, no. What I need to do is to reverse that. Draw the harmonic energy into the reagent and then apply it with the proper incantation. What was I thinking? It would never work that first way. Why didn't you tell me?"
"Fascinating! Do go on..."
"Ah ha! So you're a student of theoretical applied harmonics! Putting aside Ralston's Constant of Universal Inversion for a moment, how would you approach the problem? Draw the harmonic energy into the reagent or allow it to generate its own field?"
"I would use the blue thing."
"The blue thing? But even the simplest harmonic field is composed of entirely... Wait just a moment. The blue thing. Yes, yes, yes! I can see your point. Draw out the necessary energies using a Jarol Apparatus! But wait. What about soul reversal? You must be aware of the consequences when using the apparatus near an open magic field."

"You totally lost me."
"I'll tell you why you won't tell me. Because you were absolutely right not to. It's a fundamental rule of magic and it would be ridiculous. You can't draw from harmonic energy without a soul siphon. Since you're so well informed I'm certain you've solved the problem with thermic drift, right?"
"Um... I don't know. Seven?"
"Seven. Astonishing. I hadn't considered that. I mean, it would take months... years to work out the differentials. But what a revolutionary concept. Wait, wait. I can see a minor problem in your theory. Without a soul siphon, how would you prevent permanent magicka burn?"
"How about using calipers?"
"Calipers? That's utterly ridiculous. Maybe long ago, you could just find calipers in every household across Tamriel, but not anymore. Hold on, you've given me a brilliant idea. Just as calipers hold materials in place, a soul siphon can hold magic fields in place. Genius! And I'm sure you've completely worked out how to counteract complete dimensional collapse, right?"

You can choose between these final replies, though Wylandriah will end up forgetting what she was talking about:

"Nope, don't get it at all."
"What's not to get? It's as simple as Traven's First Axiom of Magic... or was it Galerion's Law of Casting. Hmm. I'll tell you what, let me find out where that's from. I'll need to look through my library... and get you an answer. Umm... what were we talking about?"
"Easy, it's nine."
"Of course! Nine is the most basic of magical principles. Oh, how stupid of me. That completely takes care of all your basic problems, magicka burn, dimensional collapse and thermic drift! You've done it! Now, if I can only remember what we were originally talking about."
"Swallow a soul gem?"
"Are you completely insane? Swallow a soul gem? That has to be the most brilliant and unexpected solution I've heard in a long time. It solves all of my problems and keeps the field stable! Now all I need... wait, what were we talking about?"

You can start this quest by saying to Wylandriah that she appears to need help getting organized. She will confirm this with, "Yes, I could use some help with that. An assistant perhaps? No, no, no. Maybe a familiar. No, too messy. Well, at any rate, organization is not my strong suit. Not at all. I need as much help as I can get." before requesting your help: "In fact, if you could retrieve a few things for me, I could start on my next set of experiments."

You can further ask her what she needed you to get, and she'll elaborate on her habits, saying, "As you can imagine, I tend to forget things often. Leave things around. I really must learn to put these things away." and tell you, "What I need is my Dwemer Stirring Spoon, my Orichalcum Ingot and my Grand Soul Gem. In fact, I could use them immediately." She will comically end with, "Bring those items back to me and I'll be happy to experiment on you. No, no... that isn't right. I'd be happy to reward you." You can either tell her to point the way and you'll get them, which will lead her to say, "Excellent. I can't wait. Well... why are you still standing here? Oh, right. You need to know where they are! That would help." or you can refuse and tell her maybe some other time, to which she'll reply, "A shame. Perhaps another time then."

Should you ask, she will tell you where exactly you are going: "Let's see. Last time I used the Dwemer Spoon was at my dear friend Boti's house in Ivarstead... Fellstar Farm I believe it's called. The orichalcum ingot should still be in Winterhold at the Frozen Hearth Inn. I don't know why I didn't just take it with me. And last is the soul gem. I left that one in Windhelm at the White Phial alchemy shop. It was a good trade too. Ah well."

Once you have all her items for her, you may tell her so, but she will have forgotten of her request already: "Items? What items? Let me see those. Hmm. I'm not sure how you managed it, but these are exactly what I need to start my next set of experiments. Wonderful! Well, at least allow me to reward you for your uncanny foresight." She will take the items and give you some scrolls as your reward.

Should Riften come under the Imperial Legion's control, the new jarl can be seen demanding Wylandriah to complete a request:

She can also be seen refusing the new steward, Hemming Black-Briar's advances:

Wylandriah will enlist Maven's housecarl, Maul, to help her with Hemming:

The following items are sitting out in the store, for example on the store counters. They can be purchased from the merchant, or else can be stolen. Other items may also be present in the store, but those other items are not available for purchase. They respawn after ten days.

This is the merchandise found in Wylandriah's merchant chest. These items are only available if purchased from the merchant; they cannot be pickpocketed or stolen. They are restocked every two days.