The Twilight of the Future 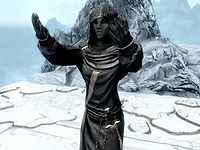 All over Skyrim, innkeepers will readily tell you about the Shrine of Azura, a monument built by the Dunmer after they fled Morrowind. Additionally, an encounter with the wandering Dunmer Faldrus will point you in the same direction, so make your way to the shrine; it is located in the snowy mountains south of Winterhold. The gigantic statue faces south atop a mountain and a long staircase. The only remaining worshipper at the Shrine, the mage Aranea Ienith, will claim that your arrival was expected, as Azura herself foresaw it and transferred the knowledge to her.

The prediction involves a "fortress endangered by water, yet untouched by it" and finding an "elven mage able to turn the brightest star as black as night". Aranea will admit her description to be more cryptic than useful and will direct you to the snowy town of Winterhold for clues. In Winterhold, numerous people can help, directing you to talk to a mage named Nelacar. It's not necessary to speak with them, however, so it's fastest to simply go straight to the Frozen Hearth and talk to him directly.

While reluctant at first, thinking you another applicant for the College of Winterhold, Nelacar will provide the information you seek. If you reveal yourself as an agent of Azura, you will have to pass an easy-level Speech check or he will dismiss you outright. He will not say no to a bit of coin, either, and will break down if you intimidate him.

Either way, he will quickly ask you what you know about soul gems and provide a quick introduction, stating they all break after use, except for one. He will then tell you the story of one Malyn Varen, a former teacher at the College, who examined the Daedric artifact Azura's Star along with a few colleagues and students. Nobody knew that Malyn was actually ill and dying and was using the Star to save himself. But by trying to make himself immortal, he lost his sanity in the process. One day, the experiment escalated to the point where Malyn killed a student and attempted to use her soul for research and, as a result, was banished from the College. He, along with a few loyal disciples, moved to the secluded depths of Ilinalta's Deep. Nelacar will finish with a plea, that you don't return the Star to Azura. His request will be left hanging, as you can do nothing but travel to Ilinalta's Deep and search for Malyn and the Star.

A fisherman without a soul

What turned Ilinalta into Ilinalta's Deep remains a mystery, as the entire fort suddenly sank into Lake Ilinalta with only the rooftops sticking out of the water. According to local legend, the place is cursed and travelers are known to go missing. Upon entering, the earthly remains of a Fisherman, his bones still in shackles, will welcome you. Examine his knapsack for a journal and some minor loot, then proceed forward and take a left at the waterfall. Not surprisingly, given the background story provided by Nelacar, the inhabitants include necromancers and their Undead allies, so be on the lookout for rare ingredients and potions. The fourth room, almost completely flooded, contains two necromancers and an underwater chest. Two water-soaked sleeping areas follow, with the second one containing the Alteration skill book Breathing Water (in a side room whose entrance is underwater), and the last containing the Enchanting skill book A Tragedy in Black, an alchemy lab, and an arcane enchanter, along with a locked door hiding minor loot. The next area includes a necromage, who will use frost spells, and a resurrected bandit on the other side of a pond. Dispose of the opposition, locate a nearby chest for some treasure, then pull the chain on the wall. This not only lowers the bridge behind you, it also provides access to the second zone further ahead. Take the western exit, and consider unlocking the door for a few potions. Proceed forward, remove the bar from the door and reenter the very first chamber of the zone, this time on a different level. You can now easily gain access to the second zone through the northern door, and a new bridge leading downstairs will make future exploration much easier. 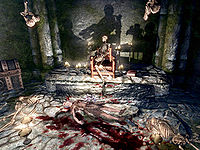 The remains of Malyn Varen

Proceed carefully forward through the tunnel and you will overhear two necromancers having a conversation on how to find another soul for the insatiable Star:
"More souls are needed for the Star. The last one died before he could be harvested."
"We can't take another villager from the surface so soon. I told you to prepare everything properly!"
"We can just sacrifice another disciple. Apprentice Haerlon will be no great waste."
"Yes. He'll do."
Dispose of them and look around the area for a few soul gems and the Conjuration skill book The Doors of Oblivion. A few potions can be found behind the eastern door, while the western tunnel leads to an imprisonment area guarded by a skeleton and yet another necromancer. In the final chamber, a boss-level necromancer will quickly reanimate three skeletons; after the fight, head up the stairs where you will find a dead bandit lying in her own blood, the earthly remains of Malyn Varen, along with his revealing Grimoire, a boss-leveled chest, and Azura's Star, currently broken due to Malyn's experiments. Taking the Star, which is on the floor next to the dead bandit, has no consequences, other than a choice: either bring the Star to Nelacar in Winterhold, or to Aranea at the Shrine.

A Soul to Keep

If you return to the Shrine, you will speak to Azura. She will tell you that it is unusable until you have purged Varen's soul from the star. Likewise, Nelacar will tell you the same thing. The difference is the Star's use afterwards. If you bring it to Azura, you will be able to use it to trap any size soul except for black souls (i.e., souls from NPCs). If you bring it to Nelacar, you will be able to trap all souls, including black, though Nelacar tells you that it can only trap black souls (see bugs section). 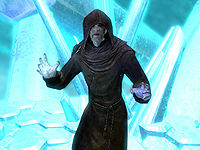 Malyn Varen inside the Star

Once you have made your choice, you will be transported inside the star to battle Malyn Varen. The interior of Azura's Star is a light-blue, surreal world with spikes and chiming sounds. Malyn will be waiting for you just inside, eager to feast on yet another soul; he will, however, quickly realize that something is wrong and rush further into the Star, throwing a few leveled Dremora at you. The interior offers very little to hide behind, making stealth a difficult option for combat. It is not possible to fall over the ledges, so proceed forward and remember to collect the valuable Daedra Hearts from fallen enemies. Once you have defeated Malyn, depending on your earlier choice, the Star will turn either black or white and you will be returned to your mortal body in Skyrim. If you went with Aranea, you will be given the restored Azura's Star, capable of capturing White Souls. Additionally, Azura will set Aranea free and she may become a follower. If you went with Nelacar, you will receive The Black Star.