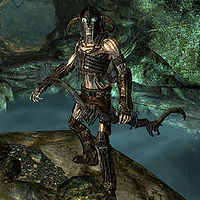 Sigdis Gauldurson is one of the three brothers encountered during the Forbidden Legend quest. Together with his brothers Jyrik and Mikrul they conspired to murder their father in his sleep, then divide his amulet between them. Consumed by power he and his brothers laid waste to the surrounding villages until the High King sent Archmage Geirmund leading a company of battlemages to stop them. After a fierce battle Geirmund pursued Sigdis, cornering him in the southernmost reaches of Skyrim. Both Sigdis and Geirmund died together before Ivarstead. A tomb was built, in which Geirmund and Sigdis were sealed within. Sigdis carries the Gauldur Blackbow, which is a leveled bow with a Drain Magicka enchantment, and a stock of arrows.