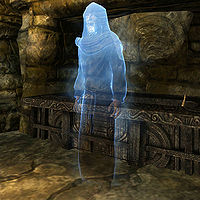 Archmage Gauldur was a powerful and renowned conjurer who lived in Skyrim during the opening days of the First Era. His aid and counsel were sought by many. A major source of his power was his magical amulet.

Though Gauldur was wise, wealthy, and honorable, his sons Jyrik, Mikrul, and Sigdis Gauldurson resented living in their father's shadow. They killed Gauldur in his sleep and split the amulet between them. Consumed by power, the three brothers laid waste to the surrounding villages until High King Harald sent Archmage Geirmund and a company of battlemages to stop them, which they finally did after a great effort and many casualties. Because of the destruction caused by Gauldur's family, King Harald ordered the Gauldur name struck from all historical records. But despite this age-long campaign to wipe out all mention of Gauldur, whispers of the legend survived, although bards still refused to tell the tale four thousand years later. For more information, see the lore article.

Gauldur is interred in Reachwater Rock. You will encounter Gauldur's spirit there as part of the related quest, where he will aid you in defeating the ghosts of his three sons and reforge the Gauldur Amulet.