This page documents the Magical Effects that can be used for Enchanting items.

Enchantment effects can only be put on items that are equipped to certain locations.

Base magnitude is the number shown when you hover over an enchantment without selecting it, if you have no perks. It is equivalent to the magnitude with a Grand soul, 0 skill, and no perks. Base uses is defined the same way but cannot be seen directly without the use of the console.

The net magnitude of the effect follows this formula:

Soul multiplier is as follows:

Skill multiplier is approximately 1 + (skill/100) * (skill/100 - 0.15) / 3.4. Overall, 100 skill points will grant 25% increase over the base magnitude. The potions will increase your skill in the formula by their given percentage. Maximum possible natural (without potions) multiplier with 100 Enchanting, 5 levels in Enchanter, appropriate +25% perk and Grand soul is 3.125x. With potions (without exploiting fortify restoration effect) the maximum is 4.21875x.

For weapons, you can select the magnitude of the effect up to a maximum. The maximum magnitude is similar to apparel, but not affected by the soul used:

The number of uses does depend on the soul used, but not on perks (assuming maximum magnitude is used).

Note: base enchantment cost must be calculated according to the formula listed here when the enchantment is set to "Auto-Calculate"

Soul charge capacities are as follows:

If the weapon has two effects, the charges per use are added together, resulting in fewer uses.

The soul multiplier is the same as for apparel.

A graph of the net use multiplier by Enchanting skill level: 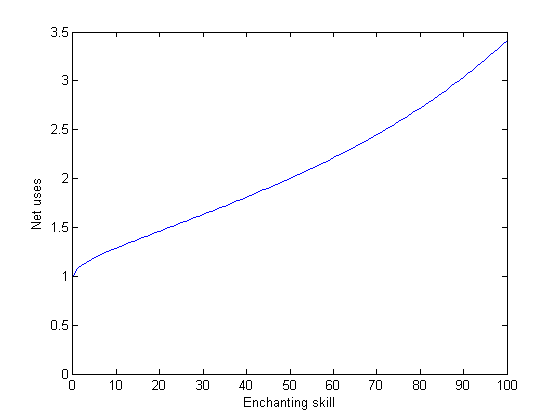