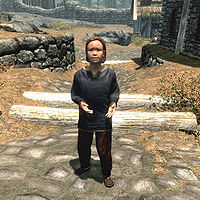 Children are young inhabitants of Skyrim that can be found in various places throughout the game world, most commonly in major cities and towns. They are not playable, and they cannot be killed. Only human races (Breton, Nord, Imperial, and Redguard) have children present in the game, no elven or beast races offspring are encountered.

Although children can be interacted with via quests, dialogue, and various games (tag, hide and seek), their most striking feature is that they cannot be harmed or killed. They also cannot be targeted for most other actions, including pickpocketing and feeding. Also, you cannot increase combat or destruction skills by using children as a target. Children will never engage in battle and will always flee at the first sign of a fight, however, if you use the rage spell on a child they will engage in fighting.

Children are present in the game world for increased realism and immersion but the game developers most likely opted for the "immortal" mechanic in order to avoid any "child-killing" controversy. For this reason, children were not included in either Morrowind or Oblivion (although the idea was brought up for the latter). They were finally featured in Skyrim; though, as stated, they are given special treatment.

There are a total of 38 children in Skyrim (3 Bretons, 3 Imperials, 3 Redguards and 29 Nords). The Hearthfire add-on adds a total of 4 more children (1 from each of the four mentioned races). The Dragonborn add-on adds 1 more Nord child.