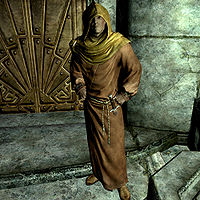 Brother Verulus is an Imperial priest residing in the Hall of the Dead in Markarth. He can initially be found outside of the hall in Understone Keep, having an argument with Thongvor Silver-Blood.

He starts his day in the Understone Keep at 8am, and will wander around the Keep for the entire day, eating at noon and at 6pm, before going to sleep at midnight.

When entering the Understone Keep for the first time, you will witness a heated argument between Brother Verulus and Thongvor Silver-Blood:

Thongvor: "What are you hiding, priest?"
Verulus: "I'm not hiding anything. It's closed for a reason."
Thongvor: "Typical Imperial lies. First you take away Talos, now you're keeping us from seeing our honored dead? You and the Jarl will answer for any desecration of my ancestors' bodies."
Verulus: "That's enough, Thongvor. We're done."

Upon first speaking with him, you can ask him about the Hall of the Dead, and he will answer: "New to Skyrim? I was confused at first, too. The Nords call their mausoleums the Hall of the Dead. It's where people in the city are buried. Fathers. Forefathers. Mothers. Foremothers." You can also ask him who Arkay is, and he will say: "Arkay. One of the Eight Divines. God of the Cycle of Birth and Death. It is his shrine people pray to when they visit the Hall. That his divinity will watch over their ancestors on the way to the next life."

After the conversation, walking up to Verulus and engaging him in conversation will make him immediately say: "If it's about the Hall of the Dead, no, you can't go in there." Asking why not, he will say: "I can't talk about it. Rest assured, the Jarl hears everyone's concerns. You will be able to visit the dead again soon." Then, you have several options:

Succeeding in convincing him to tell you will trigger the quest The Taste of Death. He will explain further what is going on: "We've discovered that some of the dead have been... eaten. Flesh has been chewed off, bones were snapped to get at the marrow inside. We haven't caught anyone or anything yet. It's like it knows when I'm there. If you can get to the bottom of this, the Priesthood of Arkay will reward you. Take my key, and be careful."

Once you have returned to him, tasked from Eola to lure him into her trap, he will anxiously say: "You've returned. What happened in the Hall of the Dead?" If you decided to kill Eola before luring Brother Verulus out of Markarth, you can tell him either simply that the Hall of the Dead is safe now, to which he will say: "Divines preserve you, you're a hero. We'll re-open the Hall right away." or, you can tell him that the cannibal has been taken care of, and he will say: "I don't need to know the details. Blessings of Arkay to you for your help. Here. Take my amulet as a reward."

If you have chosen to lure him out of the Keep, you can then tell him you need a Priest of Arkay in your travels, an offer he will initially reject, saying: "You are looking for Arkay's protection while you delve some dank tomb, I take it? My duties keep me busy in Markarth. I don't know if I can help you." At this point, you have several options: 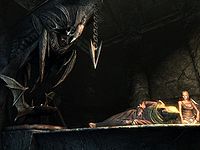 While following you during the quest, he may occasionally say "Don't worry, Arkay's protection is absolute." as well as: "Don't worry, the Eight are watching over us. I hope."

Upon successfully luring him to the chamber where he is to be sacrificed, he will be hypnotized by Eola:

If you make Brother Verulus sleep, and then decide to kill everyone in the room, he will wake up and be in a daze, saying: "What... what happened?" you can either avoid telling him the truth, and he will say "Thank you. I don't know what's going on, but I think I owe you my life." or, telling him the truth, he will say: "Sweet Breath of Arkay, were these the cannibals that were plaguing the Hall of the Dead?" Regardless of your choice, he will then say "I need to get back to Markarth. Here, take this. It's the least I can do for saving my life." or, simply: "I must return to Markarth."

If you see him later after the quest, he will occasionally say: "Thanks again for saving my life. I think I'm done with venturing outside of Markarth, though."