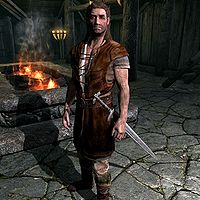 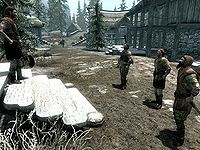 Aslfur is a Nord ranger who serves as steward to Idgrod Ravencrone, the Jarl of Hjaalmarch. He is also her husband, and the father of Idgrod the Younger and Joric.

He wears a set of farm clothes and a pair of boots. He is equipped with an iron sword, and a selection of common items and gold.

He can initially be found outside Highmoon Hall having the following argument:

Jorgen: "What's the Jarl going to do about it?"
Thonnir: "How are we supposed to feel safe in our own homes?"
Aslfur: "Please, enough already! I have told Igrod of your concerns. She'll look after you. Please, go back to your business."
Jorgen: "We've no need for wizards in our midst!"
Thonnir: "Morthal has enough problems as it is!"
Jorgen: "Bah, it's no use. Let's get back to it then."

After that he will proceed to his normal schedule. He will wake up at 7am, and wander around Highmoon Hall for most of the day, often warming up by the fire. Then at 7pm, he'll head to Moorside Inn and stay there for four hours. After that, he'll head home and finally go to sleep at midnight. However, if the Stormcloaks take Hjaalmarch, he'll be permanently relocated to the Blue Palace where he'll stay in the basement twenty-four hours a day.

He seems to be protective of his wife, saying, "If you've business with the Jarl, I'd ask that you speak to me first." or "I do what I can to see that Idgrod's time isn't wasted, and that she only has to deal with important matters." or "Too many bother my wife with their petty problems, and then don't even understand the advice she gives them." or "The only thing that matters to me is keeping my wife safe. I won't let anyone harm her." When you ask about the argument he had outside, he'll say, "Ah, you saw that, did you? Life in Morthal has been troubled lately. The people are uncertain, restless. They merely look to the Jarl for leadership." When asked what's going on in Morthal, he'll explain, "There's news of rebellion against the Empire. Strange noises have been heard in the marshes at night. And then, the tragedy with Hroggar's home. The men simply seek wisdom. Everything will be fine." When you remark that Morthal seems quiet, he'll mention a new problem, "That's what many here wanted. A quiet life in a quiet place, without the noise or the trouble of a city. Now some worry this wizard, Falion, will foul it all up."

If he gets forced to the Blue Palace when the Stormcloaks take Hjaalmarch, he'll be disheartened, worriedly saying, "We're safe here now. But what of Morthal?" or "The Empire brought stability, assurance to the people of Morthal, even if they didn't appreciate it. Now what do they have?" or "I fear for what this change will do to my family."

He can often be seen talking to his wife or the local innkeeper, Jonna:

Idgrod: "The people still doubt me, don't they."
Aslfur: "No, not at all. It's just..."
Idgrod: "It does not surprise me. They do not share in what I see, and I cannot explain it to them."
Aslfur: "Just guide them well, and all will work out."
Idgrod: "I have never doubted that, husband."

Aslfur: "Have you made a decision about Falion?"
Idgrod: "What decision is there to be made? I allowed him to live here. I stand by that."
Aslfur: "Yes, but there are concerns. Rumors that he's up to something."
Idgrod: "We are all up to something, my dear. All is as it should be."

Idgrod: "What troubles you, husband?"
Aslfur: "It's Joric. I fear his condition is worse. He calls out in his sleep sometimes. I've heard Falion's name. What does it mean?"
Idgrod: "Joric will be what Joric will be. Give it time."
Aslfur: "Still, I fear there is some connection."

Jonna: "When are you gonna do somethin' to help Falion? Stop people sayin' things about him?"
Aslfur: "You have to understand, his presence here has caused... Well, it's difficult for the people to get used to."
Jonna: "They got used to Idgrod just fine, didn't they? So what's the difference?"
Aslfur: "Yes, well. Perhaps you're right."