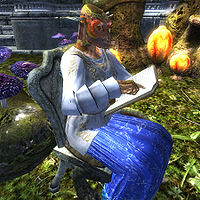 After waking up at 6am, she paces the throne room for two hours and then heads outside to the Halcyon Conservatory to relax and read her favorite book: The Prophet Arden-Sul. At midday, she skips lunch and makes herself available for steward duty in the throne chamber til 4pm, when she heads to Books of Bliss for three hours of shopping. At 7pm, she heads back to the Palace to enjoy dinner with Thadon and Gundlar. After finishing at 10pm, she spends another two hours entertaining the Duke in the throne room, before retiring to her chambers at midnight. This routine changes slightly during the Main Quest. During Ritual of Mania, she will break off her routine at midday and visit the secret Greenmote Silo and pick up drugs for Thadon. Also, like all other residents in the Palace, she will remain indoors during The Prince of Madness.

She dresses quite humbly: a grey tunic and a pair of brown loafers; coupled by a more expensive pair of blue silks. She also carries her book, the House key and a cheese wedge she consumes at meals. Since she has sworn herself to the utmost protection of her Lord, she is well prepared for combat: a leveled dagger (possibly enchanted after level 4), a leveled combat potion, a leveled scroll (50%) and a full set of Mage spells.

Upon meeting her for the first time, she will introduce herself and express her adoration for Thadon: "I am Wide-Eye, Steward to His Grace, the greatest Duke of Mania in all of history, Thadon. He is my reason for being. My purpose in life." On following occasions she will say: "Are you here to see Thadon? I would be, if I were you. Thankfully, I already have cause to speak to him every day." 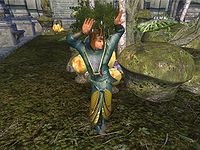 "He is my reason for being. My purpose in life."

During Understanding Madness, the Madgod will task you to find Thadon and learn what he is about. Talking to Wide-Eye will net you a new greeting, depending on your race. If you are anything but Argonian she will say: "How can I help you... Sir? Miss? You all look alike to me. It's so hard to tell. Are you here to see Thadon?" If you are an Argonian she will ask: "Yes, hatchling? Do you seek Thadon?" In any case, when asked about Thadon she will say: "I heard that you were coming, looking for Thadon. Yes, yes. Heard it all. Bored to tears by it. He's waiting for you. Unless he isn't. He wasn't, but then he was. Maybe he still is." After Thadon has tasked you with retrieving his Chalice, thus starting the Addiction quest, Gundlar will point you towards Wide-Eye: "Not my place to talk about it. You need to know, you talk to Wide-Eye." When you follow his advice, she will say: "You've been speaking to Thadon. I can tell. He has a certain... effect on people. Did he mention me, perhaps? Or was there something else you wanted to discuss?" On subsequent meetings she will change her greeting to: "Yes? How may I assist you? I'd be happy to help, if helping you means helping Thadon."

When you ask her about the Duke, she will be offering her help: "If you are working to help Thadon, I'll tell you whatever I can." When asked about the Chalice, she will comment: "I don't ask too many questions of Thadon. It's precious to him, and that's all that matters. It's his own business. But, didn't he mention where it is? Oh... I see. How brilliant of him. This is for you as much as it is for him. Oh, very good Thadon! Dunroot Burrow is your goal, my friend. And what a goal it is." When asked about the Chalice at this point, a rather annoyed Wide-Eye will ask you to pick the relevant subject: "You don't understand. This isn't just about the Chalice. This is about you. We must discuss Dunroot Burrow." On the subject of Dunroot Burrow she will tell you the whole story: "Yes, yes. A most unique place. Of course, the Chalice would be there! Don't you see? It's the Elytra. They're the reason. The Chalice, Felldew, Elytra... it's all connected. One without the others is no good, poison. Oh, a rough road awaits you. Some Elytra there are... different. You'll need to get Felldew from them, and eat it. Can't get in without it. But once you do... He wants you to learn for yourself. Learn, grow, experience. It's his way. I shouldn't say more. But the Burrow, it's northeast of New Sheoth." If you ask her about the Chalice after the map marker has been added she will repeat: "The Chalice is in Dunroot Burrow. Haven't you been listening?" On Felldew she will first say: "Oh, it wouldn't do to speak of it. Thadon's plan for you, I mean. I like you, little one, but I would never interfere with what Thadon wants." With a disposition above 70, she will warn you about the potentially dangerous drug and provide a tip: "Well, perhaps Thadon would want you to have a bit more guidance. He did say that you should talk to me, did he not? Felldew is a poison, little one. A very dangerous drug. You'll feel good at first, but that wears off, and if you go long without it, you'll suffer." When asked about Dunroot Burrow again, she will say: "Go there. Take the Felldew from the Elytra, eat it, and your journey begins. You will be thankful to Thadon when this has passed." When you return to the House of Mania with the Chalice in hand, talking to Wide-Eye will cause her to say: "Why do you speak to me, when you have the Chalice but have not yet returned it?" When asked about Thadon, she will repeat the task at hand: "Is Thadon not waiting for you to return the Chalice? Go to him, then! Do not anger him, for then you risk angering me as well." 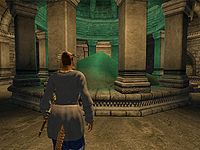 If you opt to replace Thadon during Ritual of Accession, Wide-Eye’s loyalty to the Duke will prove very useful and she will unknowingly play a big part in his demise. When asked about Thadon, most of the citizens in New Sheoth will point you towards Wide-Eye: "If I were you, I'd check with Thadon's Steward, Wide-Eye. You can usually find her roaming around New Sheoth, or spending a lot of time on the palace grounds." When you locate her, the cheerful steward will say: "Greetings, friend." and when approached, hand you a new greeting: "How can I help you this fine day?" When asked about the Duke, she will express her admiration: "Such a kind and noble man. In times like these, it's good to have a leader who still enjoys all the modern pleasures Mania has to offer." She will then elaborate on the ‘pleasures’ of Mania: "Well, yes. Apart from enjoying his painting, reading a good book, or a rousing night of erotic bedroom games? I'm speaking of Greenmote, of course! There is no greater pleasure. If I didn't have such a busy daily routine, I'd likely indulge myself in its pleasures more often." Asking her about her daily routines with low disposition will only net you: "At the risk of being rude, I must confess I don't like talking about the specifics of my routine. Thadon has too many enemies that may turn that knowledge against him. He depends on me quite dearly." However, if you raise her disposition accordingly, she will reveal her schedule: "Very well, I see little harm in telling you. After a bit of reading in the garden and running my special errand at noon, I like to shop at Books of Bliss. Around 8 p.m., we are served dinner. Gundlar is quite a chef and prepares Thadon's meals personally, adding just a hint of Greenmote. After that, we dance, we sing, or we do whatever else suits my lord's tastes." She will then tell you about Greenmote: "Greenmote is the refined version of the spores that are harvested from the spore trees that dot Mania. We keep the Greenmote safely tucked inside the Greenmote Silo. You can imagine the ruckus if its location was known. Only a select few, such as myself, know the Silo's location. However, we are sworn to secrecy." Asking her about the drug again will cause her to say: "There isn't enough gold or enough jokes in the world that would convince me to tell you where the Greenmote is located." Finally, when asked about Thadon she will send you away with the words: "Yes, I must attend to him. Speaking to you has already cost me time. I must go." On subsequent meetings she will greet you with "Again we cross paths.", but will have no new dialogue options. After this, summoning Haskill will net you: "So it's Greenmote you need, eh? Well, I think it's fairly clear who knows where that powdery substance is stored. Follow Wide-Eye. I think she mentioned an errand she runs? That would be your best bet." 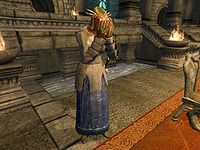 "I never suspected it was Thadon's time, but what's done is done."

Once she has confided you her routine, at midday she will busy herself with her "special errand" - she heads to the bust of Sheogorath in the northern side of the Palace Gardens and turns it to reveal a secret entrance to the Greenmote Silo. She enters and walks all the way to the final room before stationing herself in the southwestern corner as she gathers the drug. Talking to her at this point will cause her to say: "You really shouldn't be here!" She will stay in the Silo until you have picked up two samples of Greenmote, then resume her usual routine. After the trip to the Silo, getting close to Wide-Eye will cause her to say: "Hello again, my friend." When you talk to her, she will say: "Once again, we meet." but will not provide any additional information, and will bid you farewell with: "I'm sure we'll speak again." Once you have drugged Thadon's meal, at 7pm she will sit down at the dinner table as usual. When her Lord ends his soliloquy and dies, she will stand up and start weeping at his loss, commenting "I never suspected it was Thadon's time, but what's done is done. I honor his choice." She will remain in the throne room until you finish the quest, then return to her regular duties. Despite her whimpering, Wide-Eye will soon forget her beloved Duke. If you pay her a visit after witnessing Syl’s outburst against the Madgod, she will say: "Good cheer and jubilant welcome, lady/lord." After Dervenin has declared you the new Duke of Mania and Sheogorath has given you the Ring of Lordship, her disposition will rise to 100 and she will comment: "Your return is most welcome, Your Grace." When you speak to her, she will utter: "It gives me great pleasure to see you again, my lord." She will bid you farewell with: "Be well, and live free."

At different stages in the Main Quest, Wide-Eye will share different rumors with other NPCs:

"My hatchlings for you, Lord."
"May all my children serve you well, Lord Sheogorath."
"Protect my little ones, Lord."