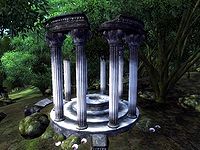 The Wayshrine of Dibella located near the Drunken Dragon Inn

Wayshrines consist of a circle of white columns located in the wilderness. The wayshrines will not show up on your compass and do not have map markers. Each wayshrine is dedicated to one of the Nine Divines. Akatosh and Julianos have four wayshrines, the other divines each have three. Activating the wayshrine will bestow a blessing consisting of healing (restore health 200 pts, restore attributes, cure disease) and a 600-second (10 Minute) duration spell that fortifies one or more attributes. There are a few benefits to be had from visiting each of nine Wayshrines, including being granted a particularly powerful spell once all have been interacted with. See the Notes section for specific information.

The Knights of the Nine plug-in includes a quest, Pilgrimage, which involves visiting one of each of the Divines' wayshrines. Additionally, your character's Infamy is cleared and you become a member of the Nine Divines faction.

Map of all Wayshrines or view all wayshrines on the Oblivion map.

The Pilgrimage of the Nine Divines: Suggested Tours

Below are two relatively efficient tours. One mostly on-road and safe, and one very quick making good use of fast traveling to prediscovered points. They may be particularly useful for low level characters who wish to acquire the benefits of a powerful greater power, namely Pilgrim's Grace (see Notes). However, this list is by no means the only possible way to visit all nine wayshrines.

Part I: The Imperial City Circle

Part I: The Imperial City Circle 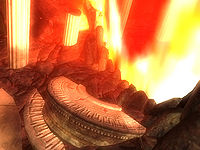