The game begins in a bare prison cell with little more to your name than your clothing: a sack cloth shirt, pants, and sandals along with wrist irons. As you explore the cell and become accustomed to your surroundings, a prisoner in the cell opposite yours threatens and berates you. When he's finished, the Emperor of Tamriel, Uriel Septim VII, and three of his bodyguards arrive at your cell and are surprised to find you in it. One guard orders you to stand aside and then the Emperor steps in. As he enters, the Emperor recognizes you from a prophetic dream, and explains that his bodyguards, the Blades, are leading him through a secret escape route. The reason for the guards' surprise becomes clear: the cell you occupy was supposed to be left empty because the route happens to start in your cell. The Emperor pardons you of any crimes you may have committed, and allows you to follow him for a time.

Note that this pardon also extends to crimes committed while attempting to escape the prison:

No sooner do you enter the escape route alongside the Blades than you and your companions are confronted by assassins clad in blood red robes and jet black armor, who attempt to cut a path through the Blades to the Emperor. The assassins are unusually strong; unless you are playing on a very low difficulty, it may be wise to sit back and let the Blades do their jobs. Although they are quickly subdued, they manage to slay the Captain, Renault. You cannot loot Renault's armor from her corpse, though you can take her Akaviri Katana, torch, and a Steel Shortsword. Her katana, however, cannot be kept; Baurus will take it from you at the end of the tutorial.

After the battle, the Blades—distrustful of you—force you to stay behind and lock the only exit behind them, forcing you to find another way out of the prison. As you look around, a pair of rats suddenly burst through an unstable section of a wall and begin to attack you. Dispatch them in whichever way you please, though this early in the game your combat options are limited to either your fists, a steel shortsword from Renault's corpse, or the late Renault's katana. You can also use the Flare spell that you start with; you don't have to wait for that part of the tutorial. Afterwards, proceed through the hole in the wall made by the rats to discover a lost cavern—and a new way out.

The path ahead is straightforward, populated only by a variety of rats, goblins, and undead. There are a few treasures hidden along the path, so keep your eyes open—most are obvious if you're observant enough. Almost everything in the tutorial is preset, though you can still find variations of some items in a few places.

Reuniting with the Emperor

After passing through the Natural Caverns, you find yourself on a ledge overlooking the Emperor and his Blades, who briefly debate their tactical options before being attacked by another group of assassins. As soon as you jump from your vantage point to their level, the Blades become infuriated at your appearance and flirt with the idea of killing you on the spot, suspecting you to be an assassin as well. This idea, however, is soon quelled by the Emperor, who demands that you not only be left unharmed but also allowed to follow. He briefly discusses the Nine Divines and fate with you before asking about your birthsign, at which point you are able to select your character's birthsign. After choosing your birthsign, the Blades reluctantly agree to the Emperor's request and Baurus—the more level-headed of the two—gives you a torch to carry to illuminate their path unless you are already holding one. However, you are not required to carry the torch; it is merely a suggestion on Baurus' part.

As you accompany the Emperor the group is beset by more assassins. Because the Blades can effortlessly take care of any nearby threats, it is very easy to slip away from battle to retrieve any treasure. 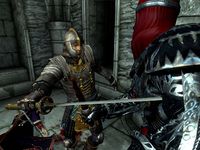 As you and your companions reach the entrance to the sewers, the next area on the escape route, you find the entrance to the sewers is barred from the other side, rendering you unable to go further. Cornered, the group is ambushed by a battalion of assassins, and the two Blades stash you and the Emperor in a small side room with orders to guard him with your life. Attempting to fight the assassins at this point causes assassins to spawn endlessly. As the two seasoned soldiers battle the assassins, greatly outnumbered, the Emperor turns and speaks to you. He ominously says that he can go no further, and that although there seems to be no hope in sight, there is one last heir to the throne not already murdered: an illegitimate son. Quickly, he bestows the Amulet of Kings upon you, and orders you to deliver it to Jauffre at Weynon Priory, who alone knows where to find the last heir. He bids you farewell, cryptically saying that you must "close shut the jaws of Oblivion." Shortly afterward, a panel in the wall slides away, and from it emerges an assassin who mercilessly strikes down the helpless Emperor in a single stroke before turning his sights on you. The Emperor's death is scripted and there is no way to prevent it, as your character is frozen in place during the action.

Baurus soon rushes in to help you deal with the last remaining assassin and adds to the already gloomy outlook by announcing that Glenroy, his counterpart, has fallen as well. After relating to him the Emperor's last instructions, he entrusts you with the key to the sewers and questions you on your class. It is at this point you are able to select your Class. After selecting your class, Baurus stays behind to guard the Emperor's body and ensure no assassins follow you. If you retrieved Renault's and/or Glenroy's katana, Baurus will take them from you to be returned to a place of honor given to fallen Blades. As the katanas are scripted to be removed, it is impossible to keep them without the use of the console. 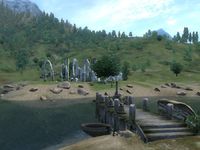 The view from the exit of the sewers

Your journey through the sewers is a brief one, and the only resistance you encounter pales in comparison to that of the Natural Caverns. Eventually you will come upon a grate protecting a long tunnel leading outside (it is rather obvious where the exit is; daylight will beam through it), where you have one last chance to alter your race, class and birthsign. Adjust them as you see fit, if at all, save, and exit the sewers to finish the tutorial and be treated to a breathtaking view of the local area and the world beyond.

Any bounty you may have acquired in-game at this point (such as from attacking the Emperor) will be immediately cleared upon leaving the sewers. From here you are free to continue on as you wish. You may continue with the main quest, or you may explore Cyrodiil, doing whatever you please. The brilliance of Oblivion is the freedom it offers in gameplay; you may now experience that freedom first hand.