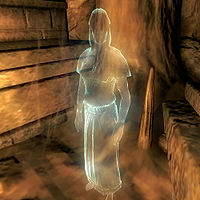 The Night Mother (a.k.a. Unholy Matron) is the spiritual leader of the Dark Brotherhood. She receives prayers from people seeking to arrange assassinations, and relays those desires to the Listener of the Black Hand. The Night Mother's ghost wears a red velvet garment and a red velvet blouse. She can be found in her crypt in Bravil, however she cannot be accessed until stage 30 of the Honor Thy Mother quest and will be inaccessible after stage 60.

When she first appears, she approaches Arquen:

Suddenly, Mathieu Bellamont, will draw his blade, kill the other two Black Hand members, and attack the Night Mother. After slaying Bellamont, The Night Mother will approach you and initiate conversation "So, at last we meet. I have been following your strange journey through the Dark Brotherhood, young one. Your killing of the old man, Baenlin... the execution of Adamus Phillida... the way you stalked and murdered each member of the Draconis family... Your Purification of the Cheydinhal Sanctuary. You, a mere underling, even managed to single-handedly eliminate half of my Black Hand!".

You can choose from several options here, each leading into the same thing:

Either way she will continue with: "I knew of his thirst for vengeance. I could have informed my Listener. But I refused! Refused to reward such incompetence! Ungolim was weak. Indeed, I allowed Mathieu Bellamont to proceed on his destructive course. Just as I allowed you to intercept him."

Another three choices will be revealed:

She will again continue with: "You possess strength, and cunning, and a heart as black as midnight. You were marked by Sithis the moment you emerged from your mother's womb."

She finally conclude with: "When you are ready, speak with me again, and I will deliver you safely to the only place you can truly call home -- the Cheydinhal Sanctuary! There is much work to be done. When you are back in the Sanctuary, speak with Arquen. She will serve as your humble servant and guide."

Speaking to her after either raiding the crypt or simply directly after will result in the following: "You've returned. I trust you've weighed the importance of your new position. For you will soon hear words that will change lives, alter destinies. And I hope you've taken everything you desire from my crypt. Once you leave, you will be unable to return. Now, are you ready to begin your new life?"

More info on the Night Mother can be found on her Lore article.

As documented in the rare and taboo work "A Kiss, Sweet Mother," the Black Sacrament involves an effigy of the intended victim -- created from actual body parts, including a heart, skull, bones and flesh -- within a circle of candles. To proceed with the ritual, one must stab the effigy repeatedly with a dagger rubbed with the petals of a Nightshade plant, while whispering the plea, "Sweet Mother, sweet Mother, send your child unto me, for the sins of the unworthy must be baptized in blood and fear." As gruesome as this ritual may be, even more frightening is its intention -- the summoning of a mysterious assassin (who some witnesseses [sic] claim is always clad in a black hooded robe) who will then receive money to kill an innocent victim. No remorse. No regret. It is, as the merchant's say, simply business. And that's what worries Adamus Phillida.