WARNING: It is recommended that you find and sell all ten Ayleid statues to Umbacano before starting this quest. After the completion of Secrets of the Ayleids, The Collector cannot be completed successfully.

This quest is obtained from Umbacano after returning the carving from the High Fane to him in the Nothing You Can Possess quest. Umbacano tells you that this is a bit different from what he's had you doing before, but still thinks you might succeed where others have failed. A rival collector of Ayleid artifacts has obtained the crown of the last king of the Ayleids, and Umbacano wishes to own it. The collector, Herminia Cinna, refuses to sell it to Umbacano, and he is hoping you can convince her to sell it to you. He gives you 1000 septims to purchase the crown, and tells you that you can keep whatever you do not spend; possibly encouraging you to steal it.

Go find Herminia Cinna; she lives in the Elven Gardens District. Upon talking to her, you will find that she refuses to sell you the crown. However, she does offer you an alternative. Herminia thinks that Umbacano has an ulterior motive in obtaining the crown. It has some minor magical powers of its own, but she believes it also has control of some other magic that he wishes to possess, and she believes it is for the best if he does not acquire it.

Herminia explains that the Ayleid society was not a unified nation, but rather was composed of individual city states. Nenalata was known as the last kingdom simply because it lasted a few hundred years longer than the others, and Herminia thinks that if you brought Umbacano the crown of another Ayleid king, he wouldn't be able to tell them apart. She has already thought about the matter, and wishes you to obtain the royal crown of Lindai. She gives the key to the royal tomb of Lindai and shows you that it is located a bit east of Chorrol.

You are now given a choice: steal the crown of Nenalata from Herminia's house, or retrieve the crown of Lindai from the ruins.

Steal the crown of Nenalata

Break into Herminia's house, make your way up to her bedroom and you'll find the crown in an Ayleid cask. You can either pick the lock on the Ayleid cask (Hard lock) or pick the lock on her desk (also a Hard lock) to obtain the key to the Ayleid cask. For spellcasters, there is no difference between the two Hard locks; for lockpickers, the desk is the easier of the two. You may also pickpocket Hermina's house key, it opens the desk as well as the house. Once you give Umbacano the crown he will ask you to guard him as he explores the ruins of Nenalata.

Pursuing this option will net you better loot, as you can obtain and keep both crowns, but you will not get the ruined crown of Lindai (which can be used to level up your Armorer skill). When you reacquire the Nenalata crown later it will no longer be tagged as stolen. The crown of Lindai can be retrieved whenever you feel like it, provided you get the key from Herminia first rather than just stealing the crown of Nenalata without ever talking to her. You can speak with her and get the key before or after stealing the crown. If you speak to her after stealing it she will tell you it is gone and mildly imply you might have had something to do with the theft. However, raising her disposition above 70, she will still explain about the Lindai crown and give you the key.

Acquire the crown of Lindai

Travel to the ruins of Lindai and delve deep into the ruins. Eventually, you'll find the crown near the end of the tombs. The crown itself is light armor with a few useful magical abilities. Return to the Imperial City and give the crown to Umbacano. He'll comment that the markings aren't quite as one of his reference books describes, but he mistakes it for the real artifact anyway. He now has one more task for you, which is the same as the end of the first option: travel to the ruins of Nenalata and act as his bodyguard.

The Last City of the Ayleids

Nenalata is located where the Silverfish River meets Niben Bay; a map marker will be added to your map. Even if three days haven't passed, you should find Umbacano waiting outside along with his other bodyguard, your old friend Claude Maric, if he still lives. If you speak to Claude, he says he doesn't bear you any ill will and hopes you hold no hard feelings either; the incident was just business.

Because Nenalata is populated with particularly powerful enemies for your level, it may be a good idea, especially at higher levels, to do the fighting yourself or aided solely by Claude Maric. This is chiefly to keep Umbacano from dying, which ends the quest. Simply clear out the dungeon before leading him in or tell him to wait in a safe room before you and Claude fight the enemies.

Umbacano asks you to escort him to the throne room, so make your way through the three levels of the ruin, fighting the undead inhabitants. Once you arrive at the final chamber of the last zone, Umbacano will place the carving you recovered from the High Fane there; this will open a secret passage to the throne room. He will then walk up to the throne, talking about how now he can begin to reclaim his ancient birthright, then sit on it and recite a few words of power in the elven tongue. From this point, the outcome will vary depending upon which path you took. 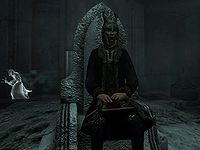 If he wears the true crown, Umbacano transforms into the King of Nenalata and will become hostile. In addition, six secret passages will raise from the sides of the room and more undead will be released. Umbacano will also attack you, using his staff or one of his range of shock spells. Kill him and the undead, loot his corpse and exit the ruins through the side passageway that opens up in throne room.

If he wears the crown of Lindai, the Dark Welkynd stones lining the room will kill Umbacano and destroy the crown of their hated rival. Several secret doors will open, allowing undead to enter the room and attack you. Fleeing here is a real option, even if you have Claude to help you out, especially at higher levels. Since you can not run back out the way you came in, you will have to go up the stairs for the exit.

Once the undead are defeated, loot them, Umbacano and Claude Maric, if he died. Your old employer is still wearing the crown, now destroyed and not repairable, has the keys to his house, and some level dependent equipment. Claude also has the usual range of level-dependent equipment. Retrieve what you wish, and then leave the ruin.