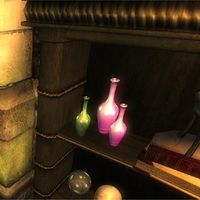 Poisons are harmful potions that can be used to damage enemies. In your inventory, poisons are listed in the "Potions" section using a green-colored vial icon (as opposed to pink for regular potions). Poisons can be applied to most weapons; when an enemy is struck with a poisoned weapon, the poison takes effect.

Poisons can be applied to most weapons; the main exceptions are your fists and staves. To apply a poison to a weapon, simply activate the poison from your inventory. You will be asked whether you wish to apply the poison to your active weapon (i.e., the weapon that is currently selected). The poison will remain on that weapon until you attack an enemy, at which point the poison is transferred to the enemy and disappears from your weapon. You can immediately apply another poison to your weapon if you wish.

For melee weapons (blade weapons such as swords and blunt weapons such as maces and hammers), any poison remains on the weapon until the weapon actually makes contact with a target. If you miss the target (or strike a wall), the poison is not used up.

For marksman weapons (bows), the poison is applied to the bow, not the arrow. Once applied, it remains on the bow until an arrow is fired. The poison is removed from the bow upon firing, whether or not the arrow makes contact with a target.

A variety of built-in poisons can be randomly found in various locations. Some enemies (for example, Bandits, Necromancers, and Goblins) will carry poisons; if you kill the enemies before they have a chance to use the poisons, you can acquire them. Poisons can also be randomly found in various loot chests. Alchemy merchants may randomly stock poisons, and there are a few other merchants (M'raaj-Dar, Shady Sam) with reliable supplies.

Poisons are made from ingredients using alchemy equipment, just like potions. The primary difference from regular potions is that poisons have negative (damaging) effects. Any combination of alchemy ingredients that have only negative effects will produce a poison. If the ingredients share even one positive effect, however, a potion will be created; the negative effects turn into side-effects of the potion.

Custom poisons can be far more powerful than the built-in poisons that you find in loot or buy from vendors. In particular, poisons combining multiple negative effects can be created.

Custom poisons' damage is distributed over time, whereas built-in poisons do damage instantaneously. For example, custom potions with Damage Health+Fire+Shock and Damage Health+Fire+Frost effects (and Damage Health+Frost+Shock effects with SI ingredients) each do a maximum (with Master level equipment and skill) of 26 points of damage each second, but over 915 points of damage in total at the end of 38 seconds. Even if the stacking of additional doses of poison is desired, a hit and run strategy offers considerable advantages to the user of custom poisons, given the disparity between immediate and long-term damage.

Poisoned Apples and Chokeberries are technically food, not poisons. Like food, they are listed with all other ingredients and will be eaten when activated. NPCs will eat either Poisoned Apples or Chokeberries if they are present when an NPC is looking for food. Eating them triggers the poison, which in both cases is a script effect which continuously causes substantial damage until the character is dead. See the article on using poisoned apples for tips on how to kill NPCs.

The script effect that causes this damage can not be used to make a standard poison, i.e., you cannot create a green vial with the effect "Deadly Poison". You cannot apply the "Deadly Poison" effect to a weapon and strike someone. Both Poisoned Apples and Chokeberries can be used in alchemy, but the resulting special effect potions will be potions: pink vials that can only be drunk. If you activate the potion, your character will drink it and be killed by the Deadly Poison effect.