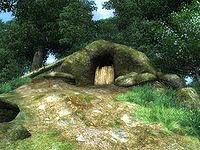 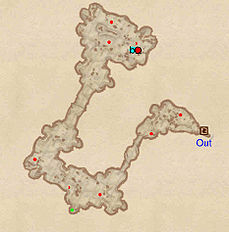 Muck Valley Cavern is the home of Sibylla Draconis who abandoned both her mother and the empire and now lives as a savage with her beloved animals. During the related quest she is your target, and rightfully so, as the cave is one large room and contains absolutely nothing but a single healing chest (green dot on map). She initially starts at Q, near her bedroll at (b), but will move around the entire cave, right down to the cave entrance at Out. After the kill, empty the lonely chest, then leave Muck Valley Cavern the same way you came.